Share All sharing options for: Dumars on Maxiell, Delfino 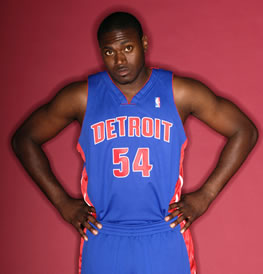 From the Detroit Free Press -- Joe Dumars on extending the contracts of Jason Maxiell and Carlos Delfino:

"We talked about it a week or two ago," Dumars said, speaking of vice president John Hammond. "I asked John, 'We have until the 31st, right?' He said, 'Yeah.' I said, 'Well, we need to go ahead and get that done at some point.' It wasn't like we were watching them play. We could have done it the first day of training camp but just had other pressing stuff going on."

Regardless, the two didn't hurt their causes in training camp.

Maxiell, a second-year forward, came in leaner and meaner and has been the team's leading scorer (14.2) in the first five exhibitions. His energy level, ability to be a force in the paint and play above the rim made the decision easy for Dumars.

"He makes plays that help you win games, whether it be rebounding or blocking a shot or effort plays," Dumars said. "He brings a certain energy to the front line that we really, really like."

You wouldn't have guessed it from some of his offseason comments (or at least the translations of some of his comments) in which he reportedly claimed to want out of Detroit, but Delfino actually seems cool with having his option year picked up:

"It's something I think everyone expected," he said. "I like the idea."

But he isn't 100% happy with his performance in training camp. A heavy schedule of international play over the summer left him feeling a little worn down, he said, and he also had to readjust from FIBA rules to the NBA. He also still wants to drop a few pounds.

His bosses aren't complaining, though, even if Delfino has struggled in a few exhibitions with his shot. Dumars said he sees past that.

"He does all the other little things well," Dumars said. "But a guy like him always gets judged by whether he makes his shot or not a lot of times. It's not a question about whether he rebounds, dishes the ball, slides his feet. That's never a question. With him it's just going to be the consistency of knocking down open shots."