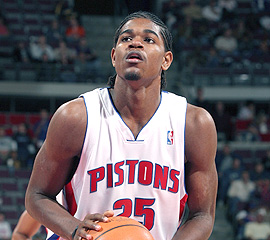 Last week I mentioned Amir Johnson's summer growth spurt, predicting he'll eventually prove to be an extreme mismatch at the small forward spot. Well, scratch that: after Johnson added two and a half inches and 20 pounds onto his lanky frame, the coaching staff has decided to move him back to power forward. From the Krista Jahnke in the Detroit Free Press:

"That's what I've been playing all my life," Johnson said. "All through high school, all through little league. Four is my position I know real well."

Even at the four, Johnson will likely be taller than most of his defenders, but he'll have to continue filling out his frame if he's going to have any success banging down low. Don't expect it to happen overnight, though; some guys just aren't build for huge muscles. We've seen it with Rip Hamilton and Tayshaun Prince, and Flip Saunders has seen it with another player he used to coach:

"That's kind of how Garnett was," Saunders said, comparing him to superstar Kevin Garnett, whom he coached for nearly 10 years. "We tried like heck to do everything we could (to bulk him up), but Amir's probably the same way. The way his frame is, no matter what you do, it's going to come by natural. Usually, that's the best way. Your body kind of grows with how you're playing."

More important than Johnson gaining weight, in my eyes, at least, is that he retains his freakish jumping ability. As long as he has that, the rebounds and blocks will be there.

Saunders also wants Johnson to develop his shot a bit more. He'd like Johnson's release to move from in front of his face to over his head, a la Rasheed Wallace.

Otherwise, he'll be asking to have his shot blocked.

"I'm working on that, moving my shot up," Johnson said. "I have a soft touch to my shot, and I can shoot it, but when the game comes, if I'm being guarded by someone real tall, they're going to block it. I've got to learn to keep it up like 'Sheed does."

We've already seen what Johnson can do in NBA garbage time, and he certainly held his own last year in the NBDL. But don't expect any meaningful minutes out of him with the Pistons just yet -- he's got no less than three players ahead of him on the depth chart, plus at least a couple more in terms of actually getting onto the 12-man active roster. Put him down as my early sleeper for 2007-08, though. Dale Davis comes off the books after this season, and Antonio McDyess holds a player option that he may or may not exercise, depending on his performance this year, which each could thin out Detroit's front court enough to warrant giving the youngster a serious look at the rotation.