Share All sharing options for: Nuggets run through Detroit 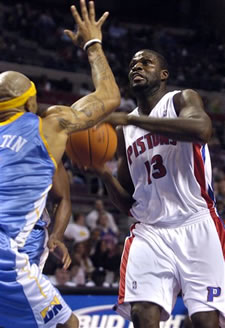 Did you know that the Pistons played an exhibition game on Sunday? To be perfectly honest, I forgot about it until long after the fact -- even after I reminded all of you about the tipoff change to accomodate those wishing to watch the Tigers. Turns out I wasn't the only one -- only 8,000 people were at the Palace, less than 40% capacity. In front of 14,000 empty seats, the Pistons lost to the Nuggets 124-105.

Even if I didn't actually watch the game, I did look at the box score, for whatever that's worth. First, the ugly:

Ugh. Whatever. It's the preseason. Sunday's game wasn't all without positive developments, though. Such as...