Dumars has spoken with Jalen Rose

Share All sharing options for: Dumars has spoken with Jalen Rose

Joe Dumars usually plays his cards close to the vest, refusing to provide many on-record substantive comments regarding a player acquisition until its advantageous for him to do so. So it may have come as a surprise to some that it was Dumars -- and not sports radio or a beat writer's "unnamed sources" -- that commented on the Pistons discussions with Jalen Rose (recently bought out and waived by the Knicks).

But before you start shopping for a Pistons #5 jersey, understand that a number of uncertainties need to be resolved in order for Rose to join up. See, Rose (at 33) feels he is far from done in the Association and will want a) more minutes than he received in New York last season and b) money beyond this season. Dumars had this to say:

"I told Jalen that he would have a limited role here in Detroit," said Pistons president Joe Dumars, who spoke to Rose on Monday. "I told him that we were not opposed to bringing him here under the right circumstances. But it would have to be a win-win for both sides."

There is also the issue of where Jalen would play for the Pistons. If Dumars were to add #5 to the mix, it would be the Pistons most vocal admission yet that they don't believe Carlos Delfino can handle a regular rotation spot. Delfino would almost assuredly be jettisoned during the season or buried on the bench where his bitching (in Spanish, of course) couldn't effect the players who actually...play. 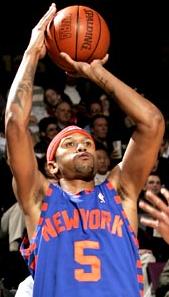 So while Dumars speaking about Jalen Rose is significant, it remains to be seen whether playing for his hometown team (the team he grew up watching) would be enough for Rose at this stage in his career. All indications are that the Heat, who failed in their bid to land Bonzi Wells late in the summer, are also interested.

I'm curious to hear people's thoughts here. Jalen is a polarizing player; there are just as many that love his game and/or persona as absolutely hate it. I personally think that while his top statistical seasons have tended to coincide with mediocre-to-bad teams, he could provide athletecism, offense, and court vision off the bench for pennies on the dollar. As much as we pimp Delfino around here, even we have to admit that production thus far has not won out over potential. And while I do feel that Delfino's game is NBA-ready, if you take the chance -- and he falls flat in the early months of the season -- there will be no one the caliber of Jalen Rose to be had for the veteran's minimum in December or January.