Not on the top for long

Share All sharing options for: Not on the top for long 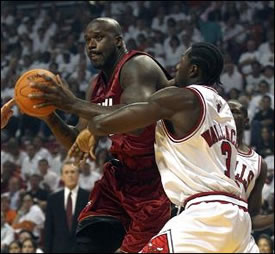 The Miami Heat opened the 2006-07 season in historic fashion. One minute their getting their backs patted by David Stern. The next? Getting their asses handed to them by the Chicago Bulls while becoming the first NBA champion to lose their season opener by as many as 42 points. That's right: the Bulls won 108-66. How bad was it? Put it this way: if Chicago had decided to take the entire fourth quarter off, they still would have won by 14.

I'm sure most of you are wondering how Ben Wallace performed. He did what he does: five points and 11 boards and a block in 28 minutes. And after Day 1 of NBA action, I'm happy to report that Ben is actually tied for the league lead in free-throw shooting. That's right, he was a perfect 1-1 on Tuesday. I sense a new beginning! What's that? He shot just 21.9% from the line in the preseason? Oh. Nevermind. Nevertheless, the Bulls have to be pleased with his rebounding. They just better be careful and not score more than 100 points too often -- Ben gets awfully testy when that happens.

As for the rest of Chicago, Kirk Hinrich celebrated signing his contract extension with 26 points and three assists. Ben Gordon, who led the Bulls in scoring last year, shot 1-9 from the field to finish with six points while Chris Duhon needed just eight shots to come off the bench and finish with 20. The only downer for Chicago was the status of rookie Tyrus Thomas, who left the game with a broken nose.

As for the Heat, it was the Dwyane Wade show... and that's about it. He paced the team with 25 points in just over three quarters of action while no one else on the team broke double-digits. Oh, and you know the so-called Rasheed Wallace/no-tolerance rule the NBA just added? Mark a tech down for Wade for arguing with the officials. Anyone that's watched him lose his focus whining to the refs knows that this rule will affect him as much as anyone in the league... assuming the refs continue to call it fair.

In all seriousness, though, here's something to track this year: Wade is a career .241 shooter from three-point land, but after going 13-76 (.171) last year in the regular season he went 14-36 (.378) in the playoffs, which was a pretty big shock considering he had shown no sign whatsoever of improving during his first three years in the league (he'd actually regressed each season from his rookie numbers). On Tuesday, he shot 2-3 from beyond the arc. Sample size, sample size, sample size... but it's still interesting (and a little bit scary) to think that last year's playoff performance might mean he's added another dimension to his game.

Getting back to the game... Shaq, who's still thawing from the preseason, finished with just seven points on 3-10 shooting. He also tallied five boards and three turnovers in 24 minutes. I tell you, $20 million a season doesn't buy as much as it used to. Think about it this way, Shaq just earned about a quarter of a million dollars for mailing one in on national TV. Antoine Walker finished second on the team with nine points but went 0-for-6 from three-point land. As for the rest of the Heat... well, there were guys in uniform, I suppose, but it's not like they really matter.