Share All sharing options for: Pistons right ship against Lakers 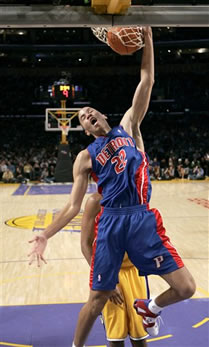 The Pistons got back on track with a convincing win over the previously-unbeaten-at-home Lakers. With Rip Hamilton sitting with a hyperextended elbow, Tayshaun Prince took the reins to lead the Pistons in scoring -- he shot 12-of-25 from the field to tie his career-high with 31 points. That was nice to see, especially since Prince had been struggling the past few games, not to mention the fact he got to do it in his old backyard in front of about 45 friends and family. How hot was he? He scored 18 in the third quarter alone, matching what the five guys wearing yellow did.

Flip Murray started at the two for Rip, scoring 10 in 38 minutes, which also opened up time for Lindsey Hunter to back-up Chauncey at the one. Hunter played a season-high 20 minutes with six points (his first of the season) and three assists. Nazr Mohammed struggled with his shot (2-9 from the field) but still grabbed 10 boards (six offensive!) with five steals in 23 minutes. We also saw the season debut of Dale Davis, who grabbed three boards in six minutes. Sadly, it came at the expense of Jason Maxiell, who earned his first DNP-CD"Did Not Play - Coach's Decision" of the season. Count on him getting some burn tonight on the second half of the back-to-back.

Perhaps the most impressive aspect of Detroit's play was their defense, and in particular, their zone defense. Kobe Bryant clearly isn't completely back in gear, but I think the fact he had just two points on 1-4 shooting through three quarters says something. He finished with a flurry by scoring 17 in the final quarter, but by then the game was already well in hand. Austin from HoopsAddict.com I don't think we've mentioned the site enough on DBB, but I've become a daily reader of HoopsAddict. It's nice and skimmable, with enough material for me to glance at what I don't care about and still have a few meaty nuggets that interest me. General NBA fans would be wise to check it out if they haven't already. describes how it went down:

For the majority of the match up the Pistons set up in an unusually effective zone defense with Tayshaun Prince stationed in the middle operating as the quarterback. Head coach Flip Saunders has never been one to shy away from trying to integrate zone defences into his teams, and was one of the first coaches to truly welcome the rule change that enabled them to do so back during his tenure in Minnesota. Taking the pressure off of the guards to lock down their opponents on the perimeter enabled the Pistons to get out and run. Sitting in the center of the zone with the reach of Inspector Gadget and vision of Sherlock Holmes, Prince was able to orchestrate the defense with ease and was the prime benefactor of the consequently fresh legs on offense. After a solid first half Prince would only add to his performance, going ballistic in the third quarter scoring 18 points, and eventually tying his career high of 31.

So there you have it: the zone defense can work. Other random thoughts: