For our next Motor City Madness DVD giveaway, we're asking you to come up with a haiku based upon the the Boys in Blue (see the rules of haiku, here).

Stay with me here...

A couple months ago, before the start of the NBA season, Matt had the amazingly original idea of doing an NBA preview all in haiku. I was giddy at the prospects of us writing such a post. But, as tends to happen when your major in college was "beer" (and both Matt and I can be counted as alumni of this illustrious program), the idea died on the vine.

Well, lo an behold, better bloggers than us had experienced a similar epiphany, and now haiku is everywhere. And if executed properly, it can be effing hilarious. 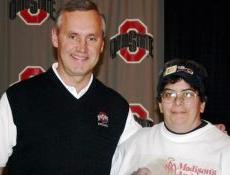 The following examples from MGoBlog (one of our favorite UofM blogs) were penned in honor of Michigan football's David Harris (LB) and Lamarr Woodley (DE) -- who in five short days will do their part in destroying the Ohio State football program on their own soiled Columbus turf, sending throngs of tearful, half-witted Buckeye faithful home questioning the power of their sweater-vested golden calf (Jim Tressel -- he's the one on the left, btw).

Ummm, sorry...I might be a little distracted this week. Anywhoo, back to those examples:

It is that simple, folks. Come up with an original Japanese poem about Flip or Nazr...Chauncey or Rip...Laimbeer or Mahorn...Sheed or David Stern; throw your entry up in the comments (remember, 5-7-5); and we'll choose a winner by noon (EST) tomorrow.

Bonus points if you make me laugh or cry.