I apparently missed any mention of this before, but Tayshaun Prince has a role in Snoop Dogg's upcoming Hood of Horror movie. It's being released on Friday. I'm still not aware of a regular release, but it's being shown at select movie theatres as part of a horror-movie film fest. So if you're not doing anything this Sunday at 10pm, check it out... though, as far as I'm aware, not anywhere around Detroit -- such is the life of low-budget gangsta' horror flicks. I learned of Prince's involvement from the bottom of this ESPN Page 2 article, which wasn't altogether interesting until I saw the Prince mention in the sidebar:

TAYSHAUN PRINCE ON PLAYING 'FOOTLOOSE,' A LEGLESS, TORMENTED SOUL: "I still have no idea who I was playing. But I can't forget that makeup chair. I'd sit in it for two hours getting blood and some airbrushed makeup on my face. I just wanted to try out acting, but it's not something I really want to do. Snoop has done some acting and that helped a little bit. I've met Snoop before that, but he surprised me a little because he doesn't mess around. He's straight to the point. I'm definitely going to check out the movie. I know my wife is curious." 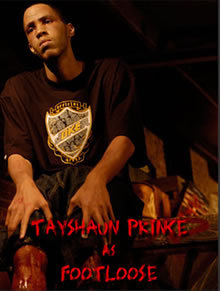 Prince isn't the only athlete in the movie -- the Lakers' Lamar Odom also has an appearance, as well as the Oakland Raiders' Teyo Johnson and (one-time Wolverine) Justin Fargas. Prince's Compton roots obviously helped him get the gig -- there's an obvious West Coast connection with the athletes involved -- not to mention the fact that Fargas is the son of Antonio Fargas, the original Huggy Bear in the Starsky and Hutch TV show, whom Snoop Dogg played in the movie remake.

What's the movie about? From the sounds of it, it's an urban Twilight Zone/Tales from the Crypt. Shakespeare it's not, but it's definitely a step up from pitching for Wallside Windows. There are some trailers on YouTube, though none of them feature Prince.

Look, he's got an IMDb page and everything.

[Update: I posted this around 1am last night, not knowing that the Free Press had a small little blurb about this in the works for this morning: Prince among walking dead in latest Snoop Dogg flick.]