Share All sharing options for: Hornets swarm the Palace

After living out of a suitcase for almost the entire season -- five of the first seven games were on the road -- the Pistons will play five of their next six at the Palace, starting with tonight's game against the New Orleans/Oklahoma City Hornets, hereafter referred to as NOOCH. 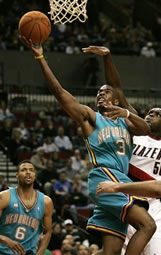 Who to watch: Let's start with Chris Paul, who has drawn comparisons to Isiah Thomas and has quickly ascended into a small group of elite NBA point guards. He's averaging 17.3 points and 9.3 assists -- he has the potential to murder Detroit's defense if the Pistons don't tighten up on the perimeter. If they can contain him (and he's been inconsistent this year -- just two points last night), the Pistons should be okay -- no one else on the team averages even 2.0 assists per game.

They're never out of the game: No lead is safe against NOOCH, not when they have the league's premier three-point shooting threat. Peja Stojakovic leads the team in scoring by getting almost half of his points from beyond the arc.

What happened last year? Things got a little uncomfortable for the Hornets the last time they came to the Palace, and it has nothing to do with their eight-point loss: the Palace sewers backed up into the visiting team's locker room, which prevented the Hornets from taking post-game showers. As for the actual game, Antonio McDyess was a beast (26 points, 14 boards), playing starters' minutes while filling in for Rasheed Wallace, who missed the game after being suspended for too many technical fouls.

Injuries? The word is that Rip Hamilton will try to play tonight but won't make a decision until shortly before tipoff. The range of motion on his hyperextended elbow is improving but definitely not yet 100%. Complicating matters is the news that Lindsey Hunter sprained his right ankle in practice (not the problematic left ankle that he had surgery on last year). He's almost certainly out, which means *gulp* more backup point guard minutes for Flip Murray.

The Hornets will be without starting forward David West, who's still nursing a forearm injury, and Tyson Chandler, who lost a tooth and suffered a concussion after taking an elbow to the head last night. This is a lucky break for Detroit: Chandler leads NOOCH in rebounding and West is the second-leading scorer and rebounder. With any luck, Detroit will exploit the suddenly undersized and undermanned NOOCH frontcourt by dominating the glass.

Game starts at 7:30 on FSN -- as always, leave your pre-/in-/-post game thoughts in the comments.