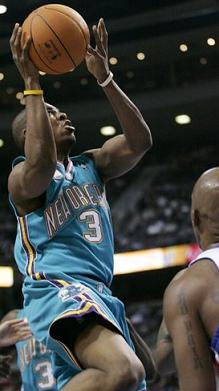 Prepare yourselves, Piston fans, because the chorus of naysayers is about to get much, much louder.

The Pistons did not -- as was expected after three full days of rest -- snap out of their supposedly West-coast induced funk last night against New Orleans/Oklahoma City. The at-times listless Boys in Blue allowed the undermanned Hornets squad to sneak out of the Palace with a 100-99 victory. And -- for those trying to repress memories of Golden State -- were it not for the brief return of Dee-troit Basketball in the second half, the Pistons appeared headed down that same sordid path.

Hopes for the Pistons' return to form would dissipate early. While they actually put some points on the board in the first quarter for a change, a lightweight defensive effort led to a three-point, 27-24 deficit after one. And had Tayshaun Prince not decided to dominate the offensive end in the first quarter, it could have been much worse. As it was, the Pistons had to claw back just to cut the deficit to 11 by halftime.

It was the Hornets -- in the second game of a back-to-back and missing two frontcourt starters due to injury -- that played with an urgency the Piston faithful could only dream of. Rookie Hilton Armstrong, starting in place of Tyson Chandler, contributed 17 pionts and 9 rebounds and hit the game winning free throw with 3 seconds remaining. Chris Paul continued to impress with 20 points (on 50% shooting), 13 dimes, and zero turnovers. Overall, NOOCH rebounded better (leading to 13 more shot attempts), took better care of the ball (only 7 turnovers), and shot better from the line. Simply put, while banged up and fatigued, they were the better team.

I could wax poetic (haiku-ic, even) over some of the moral victories in this one -- Chauncey putting up 29 and 9 and showing the "Big Shot" mentality to bring the Pistons back in the second half; Tayshaun's good quarter (too bad it wasn't a full game); and Rip's successful return to the lineup (23 points on 50% shooting) after missing the last two games of the west coast trip. But heaping praise isn't deserved at this point.

How bad was this one?

"They’re shorthanded – that’s the messed up thing," Billups said in an unusually somber locker room. "Their starting frontcourt is not even playing in this game, they had a tough trip up here last night, a back to back. It’s a bad loss. That’s the bottom line. It’s a bad loss."

Or, to sum it up, as Billups told Keith Langlois of Pistons.com:

So here it is. As Cleveland lives up to their early season hype; as the Magic drive their soon-to-be-Piston draft pick further and further from the lottery; and as less-talented teams like Philly, Portland, and Sacramento get the max from their potential -- the Pistons limp along, with their enormous sense of entitlement in tow. With every game this team gives away, the questions grow louder. What's missing? Or, more to the point, who?