Lesson learned: take nothing for granted

Share All sharing options for: Lesson learned: take nothing for granted

Ouch. It didn't take long to see how this one was going to end. The Bucks had control of this game from the opening tip, exploiting Detroit's interior defense in ways that I don't even think are legal in six states. Andrew Bogut, who missed the entire preseason with a sprained knee, was a one-man wrecking crew in the opening minutes with eight points and five boards in just five minutes. (Not a typo: f-i-v-e (5) minutes.) He cooled off (he scored just eight more points with four boards the rest of the way), but the damage was done, having exposed Detroit's Ben Wallace-less defense as little better than, say, five inflatable replacements.

And don't be fooled, this was indeed a function of Detroit's first season opener in seven years without the opposition fearing the 'fro in the middle. God bless announcers George Blaha and Greg Kelser for (likely) sticking to the company line and refusing to utter He Who Isn't Here Anymore's name more than a couple of times, but let's get real, there isn't a chance in hell Milwaukee would have enjoyed so many consecutive second- and third-chance opportunities had No. 3 been patrolling the paint.

Am I worried? Do I regret Detroit's decision to let Wallace leave? No, not yet (Ben didn't exactly turn in a gem of a game in Chicago's loss to Orlando), but it was quite clear this team needed a couple of minutes to realize that someone was supposed to go after all of those loose balls. I stopped counting how many balls Nazr Mohammed touched but couldn't grab hold of in the first quarter, but he eventually got the memo and finished with 12 boards. Tayshaun Prince ultimately pulled his weight and then some, snagging 11. Heck, even Chauncey Billups did his best Jason Kidd impression and hauled in six.

So why couldn't Detroit ever close the gap? Three reasons, detailed below: 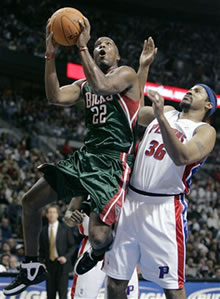 Points in the paint. Detroit finished with nine blocks to Milwaukee's zero. Whatever you think that might mean, it's the opposite, because Detroit was an absolute sieve in the paint. The perimeter defense was lacking and the interior defense was virtually non-existent: 70 of Milwaukee's 106 points came in the paint, and that doesn't include all the free throws they earned from banging down low.

Everyone wearing green joined the fun, not just the big guys. Michael Redd, known more for his deadly jump shot, set up camp in the lane, scoring a good chunk of his 37 points in the painted area. Mohammed certainly tried, but he's not Ben and the refs know it -- he eventually fouled out. Who else was responsible? Rasheed Wallace, for sure. Everyone will remember how Wallace got the boot for two technicals in the third quarter (more on that later), but don't forget that he was pretty much invisible in 23 minutes before leaving, especially in the first half. He finished with two blocks with no points and three boards, but that doesn't tell the story how fearless the Bucks were taking the ball inside at any point during the game. Mohammed was signed to play Ben Wallace's position, but Rasheed needs to realize he's supposed to try filling Ben Wallace's role as the intimidator down low.

Turnovers. Detroit had 22 of 'em; Milwaukee, just eight. It was downright embarrassing how sloppy things got. Tayshaun Prince and Rip Hamilton had five each, but you can't pin all the blame on them -- a few of their "miscues" were passes out of bounds where the intended recipient clearly missed a cut. Flip Murray had three and three other players added two apiece, so this was a team-wide problem.

I do know that Flip Saunders recently admitted to only using half of his playbook last year. Did he try to unleash the entire second half all in one game? Were the players too confused to know their spots? Or was Detroit simply out of sync playing in their first meaningful game in five months? Too early to tell, but I doubt this will linger: protecting the basketball has long been a hallmark of Detroit's offense, even after Saunders loosened the reins last year. In all honesty, we may never see Detroit play a game this sloppy all season.

The rotation. Given the disparities in turnovers and points in the paint, this easily could have been a game in which the home team gets blown out, by, say, 42 points. But it wasn't. Despite increasingly alarming numbers added to the stat sheet each quarter, Detroit actually found a way to outscore the Bucks by one point over the final three quarters. It was never enough to make up for the nine-point lead Milwaukee built up in the first frame, but I got the sense several times that all Detroit needed was one small run to finally grab hold of the game.

With that in mind, the guys who were willing to bring energy were frequently left on the bench. Case in point: Detroit's frontcourt was listless for much of the game: on defense, as I've already explained, but also on offense. Nazr did his job with eight points on 4-6 shooting, but Rasheed and Antonio McDyess combined for just two points on 1-10 shooting in 52 minutes. So why didn't we see Jason Maxiell, who emerged as an extreme high energy guy in the preseason, before Saunders was forced to play him midway through the third following Rasheed's ejection? In less than 11 minutes he outscored Rasheed and Antonio, albeit with an unimpressive three points on 1-3 shooting. But he also grabbed a couple of rebounds with three blocks and a goal-tend, showing as much interest in protecting the rim on defense as he does abusing it with vicious dunks on the other end.

I was also disappointed we didn't see more of Carlos Delfino, not because the starting backcourt played poorly (they didn't) but because Flip Murray played 20 useless minutes. Murray may have finished with 10 points, but realize that six came on two three-pointers in the final 90 seconds when the game was already well out of reach. Delfino, on the other hand, scored all eight of his points in a three-minute stretch in the second. He showed a lot of energy in 12 minutes of action, even grabbing three boards (to Murray's one) with just one turnover (to Murray's three). Coulda, woulda, shoulda, but the view from the couch suggested that Murray was useless and Delfino was energetic, suggesting their minutes should have been reversed. 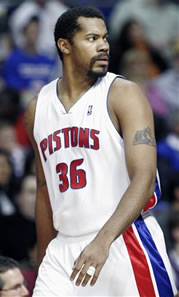 Even if you missed the game, you've probably heard by now that Rasheed was ejected. Turns out the referees are dead serious about enforcing David Stern's crackdown on players complaining about calls. Sheed's first tech was pretty frustrating -- after being whistled for a call down low, he screamed in frustration. He wasn't facing a ref, mind you, he just screamed. According to the letter of (new) law, that was enough for the T... though you have to figure, given Rasheed's reputation, that the officials had an itchy trigger finger just waiting to let him know what was up. Surprisingly, he took it in stride, perhaps knowing it was just a matter of time.

Rasheed did a little more talking to earn the second technical... but not to the ref. Rasheed appeared to be having words with Charlie Villanueva after Villanueva got away with an uncalled clearout that involved swinging his elbow dangerously close to Rasheed's, um, goods. For whatever reason, though, Rasheed was soon T'd up. Here's the part that I'm nervous about -- as Rasheed was leaving, he jabbed his finger at the ref's face (not touching him, but certainly showing him up) and audibly called him a "deaf bitch." At least that's what I heard, but after replaying it several times (and reading that The Mighty MJD heard the same thing), I'm pretty sure that's what it was. Perhaps Rasheed was frustrated that the ref couldn't hear that he was talking to Villanueva and not complaining to the ref, but whatever it was, I can't help but wonder if there will be repercussions from the league. If so, here's to hoping it's just a fine.

So what, it was all bad?

Far from it. Offensively, I thought Rip Hamilton looked great. Before last year, he decided he was going to work on his shooting range. He did, and he came back to lead the NBA in three-point shooting percentage. This summer, he decided he was going to work on driving the lane. He did, and in his first game back he looked outstanding off the dribble getting to the hole. He finished with 25 on 8-13 shooting, including 9-12 from the free-throw line. The more he drives the lane, the more he'll get to the line, and he's usually money from there. If the improvement he showed off the dribble in his first game holds up, he could push his scoring average up a couple of points without changing anything else.

Chauncey Billups was also in top form, scoring 25 on 6-14 shooting with eight assists and the aforementioned six boards. He had a couple of turnovers, but he was one of the lone calming influences on the offense on a night when most of his teammates actually looked eager to throw the ball away. Tayshaun Prince didn't look half bad crashing the boards and scoring 16 -- too bad his turnovers tainted his line. Seriously, it wasn't all bad, it's just seemed that way since Detroit could never get over the hump and take the lead.

I'm already around 1,600 words on a game that I'd as soon forget about completely, so this is where the post ends. I suppose I was just a little amped about the start of the season.

One game down, 81 (hopefully much more enjoyable) games to go.