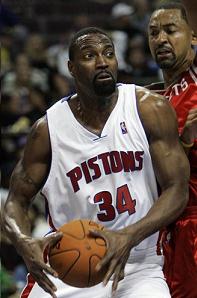 Over the past year, Matt and I have occasionally taken our mancrush of all things Carlos Delfino to comical levels on Detroit Bad Boys, and only occasionally has it been in jest. This year, some of us (tilting head towards Matt) have added an affinity for Jason Maxiell (aka, "The Baby Eater") to our polygamous relationship with Piston draft picks. (I'm in the minority, I'm sure, but I would like to see at least one assist from Max before being convinced he's deserving of double-digit minutes. Max currently has 0 assists in 99 minutes this season; 3 in 256 career minutes.)Because at this point, he's the reincarnation of Yinka Dare. Yes, "reincarnanation" is the right word -- Yinka Dare is no longer with us. I know, I was shocked too...no, I don't have any idea how it hap...yes, yes it is tragic. Look we're digressing here.

But in two recent Piston wins, the Piston youth has returned to the end of the bench, and vets Lindsey Hunter, Dale Davis, Flip Murray, and Antonio McDyess have eaten all but a handful of the reserve minutes available. While you could argue that the two wins are more due to a newfound intensity (the kind only 3-5 can bring) than to Flip's more mature rotation, I suspect that it won't matter much. So long as the team is winning games in the short-term, these changes will be semi-permanent. What remains to be seen is whether this new rotation -- should it remain -- is good for the Pistons both this season and in the long run.

I’ll admit this much: I suspect that the steady play of this middling veteran rotation will minimize mistakes and grab a few more wins in the first half of ’06-07 than the rotation that opened the season. There won't be any learning on the job for the old guys; their effort and output can be more or less predicted. (Let's face it -- for all their athletic ability, Maxiell and Delfino are anything but consistent on the floor, with contributions ranging from "game-changing" to "barely there.") But in the second half of the season, as the team approaches 82-games, will the lack of experience for the Pistons' fresh legs hurt them? Will Dale Davis and Lindsey Hunter be the same players in March as they were in November? 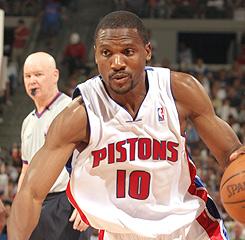 Perhaps the better question is this: even if the Piston vets are miraculously healthy come February or March, how good can this Piston team be with its current rotation? We're not exactly talking about a mid-30's Barkley, Olajuwon, and Drexler combo here. We've seen ‘Dyess, Murray, Lindsey, and Davis’ ceiling; we know what they have to offer. Is it enough for the Pistons to make significant strides in the East? Or is Blue again sacrificing the development of their youth -- only this time for the sake of a 45-50 win season (vice 64...or 54, for that matter).

At what point do you decide to take your lumps now for the long-term health of the franchise?

Or, with the rumors of Chauncey's imminent departure, is this essentially Custer's last stand? Is next season the time for a full-blown youth movement?

What do you all think?