Share All sharing options for: Pistons take on Answer-less Sixers 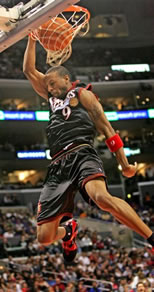 Invigorated by a two-game winning streak, the Pistons look to rise above .500 with a trip to Philadelphia. As luck would have it, Allen Iverson (ie, the heart and soul of the team) is expected to sit after undergoing surgery to remove an abscessed wisdom tooth. Who replaces him? Not positive, but my guess is Kyle Korver. That's obviously a bonus for Detroit, but they need to be careful, as the guy is already Philly's second-leading scorer and shooting an obscene .571 from three-point range. Given 40 minutes, he just might jack up 30 shots.

Subplots: Nothing to speak of... Detroit swept the series last year, and without AI it doesn't look like Philly has much of a chance. Of course, now that I said that, look for Chris Webber to turn back the clock, Sam Dalembert to turn in a double-double and Andre Iguodala to penetrate all night long.That last part wasn't supposed to sound nearly as awkward as it turned out...

Hey doesn't Korver kind of look like that one guy? Yeah, Austin Kutcher, welcome to 2006.

What's the line? Philly +4.5. Hey, did you guys know that Casino Windsor now allows sports wagers? I just found out today. I haven't been across the river in a few years, but that's definitely a reason to head back.

As usual, share your thought on the game in the comments.