Share All sharing options for: Detroit goes philly on Philly

It was a long time coming, and it happened against a team missing its top two stars, but you have to appreciate what the Pistons did against the Sixers last night. The common thread to just about every game this year has been a slow first quarter and an early deficit, but the Pistons came out firing on Tuesday to win each of the first three quarters before cruising to a double-digit victory. 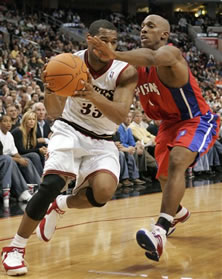 The Pistons were outrebounded 44-36, but it didn't really matter considering they shot 50% from the field while holding the Sixers to just 39%. Without Allen Iverson, who had a wisdom tooth removed earlier in the day, or Chris Webber, who had a sore back, the Sixers simply didn't have the weapons. Detroit native Willie Green started in place of AI and scored 24 in 43 minutes, but no one else on the team could muster more than 13 points.

As for Detroit, Tayshaun Prince and Rasheed Wallace led the way with 25 and 21 points, respectively. Sheed shot 6-8 from two-point land but 2-6 from beyond the arc. I love the added dimension the long ball brings to Sheed's game, but he's damn near unstoppable from inside when he wants to be. There's no use harping on it in a victory, but I mention it because it's always one of the first things I look for in the box score. That being said, Sheed has certainly picked up the slack down low on defense, grabbing 11 boards and blocking three shots. He's averaging 9.7 boards and 2.1 blocks per game, which are both career highs. (Plus, for those scoring at home, he hasn't picked up a tech in his last seven games -- didn't we tell you things would even out?)

The Pistons played small ball as much as ever -- Nazr Mohammed played just 19 minutes and Antonio McDyess, Dale Davis and Jason Maxiell combined for just 26 off the bench. Rip Hamilton and Chauncey Billups, meanwhile, each played at least 35 minutes, with Flip Murray, Lindsey Hunter and Carlos Delfino combining for 44 off the bench. As he has for most of the year, Mohammed managed to make the most of the playing time he got -- he made both of his field goal attempts and finished with four points, five boards and a steal, though he also committed four fouls.

I could rant about Davis getting five minutes while Maxiell only got one, but I'd be doing it on principle alone and not because I actually care this time. I'm just happy to see an easy win, even if it did (literally) put me to sleep while the second half. The Sixers aren't very good -- especially without AI and C-Webb -- but for once the Pistons looked like the Pistons of last year, and I'll take that and smile no matter what the circumstances.

(The title? Sorry, I've been reading too much YAYsports!)