Bobcats, Morrison tear (as in rip, not cry) into the Palace

Share All sharing options for: Bobcats, Morrison tear (as in rip, not cry) into the Palace 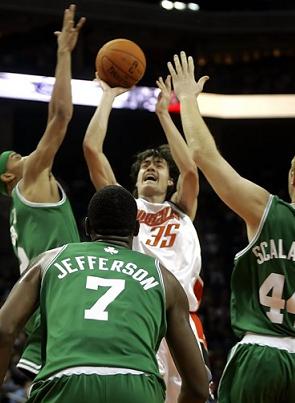 Why should I care about tonight's game? The Bobcats are something of a giant-killer this season, having slayed both San Antonio (in San Antionio) and Cleveland on their way to a 3-8 record. The Pistons hope to avoid being their third .500+ victim.

Adam Morrison, huh? Laugh all you want about Morrison's tearful exit from the NCAA tournament last year, but he's a baller. He's struggling with his shot thus far this season and still has that horrible haircut, but he's broken the starting lineup and has had a few performances that justify his status as the third pick in the '06 draft.

Hello, my name is Emeka. Emeka Okafor came into this season far below the radar after being injured for most of the '05-06 season. While fellow '04 first rounders Dwight Howard, Kevin Martin, Andre Iguodala, et al garnered the preseason hype,I'm amazed at how many solid to very good NBA players have come out of the draft class of '04. Okafor returned in relative obscurity. Well, he's on every Bobcat opponent's mind now, putting up 19 points, 12 boards, and almost 4 blocks per game. (During one four game stretch this season, Okafor put up almost 24 points and 16 boards per game. That's just silly.)

M fans may remember... Bernard Robinson, Jr., who was drafted by the Bobcats in the second round of the '04 draft and has stuck it out for this his third season. Who says Michigan basketball is irrelevant?

Bottom line. Despite my attempts to hype the Bobcats, the Pistons should dispatch with them easily. For the Pistons, tonight's game begins a six game stretch against opponents with a combined record of 18-39. Time to make hay.