Share All sharing options for: Pistons go two for the weekend (again) 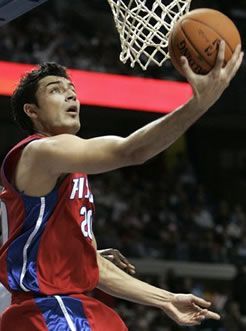 The Bobcats may still have a lousy record, but they're a pretty fun team to watch with their core of Emeka Okafor in the middle, Gerald Wallace and Adam Morrison (who has movie star looks) at the forward spots and a pair of point guards in Raymond Felton and Brevin KnightYou may remember, both myself as well as several DBB readers covet Knight should Charlotte put him on the block. both in the starting lineup.

Nevertheless, Charlotte lost in the clutch against Detroit, who beat them out in the fourth quarter with both their veteran guile as well as a nicely-timed infusion of energy from the bench. From the Free Press:

That's about when the Pistons received contributions from one of their own reserves, swingman Carlos Delfino, who scored six points in less than two minutes to help the Pistons reclaim the lead.

He was an energetic force on the court, scoring mostly around the basket, including a fast-break reverse layup and a fast-break dunk.

This is the second straight game Delfino has contributed, and he's starting to show he can handle important minutes.

"Carlos is a player that gave us great minutes, man, great minutes off the bench," Pistons guard Chauncey Billups said. "He is aggressive, attacking the basket, slashing, doing the things that he does.

Flip Saunders had this to say about Delfino in the Detroit News:

And, just to be thorough,Come now, you didn't really think I'd pass up on a chance to bask in DBB favorite Delfino's day in the sun, did you? I may as well point out that Del-Phenom was featured prominently in MLive's headline, which proclaimed: "Pistons win behind Delfino’s big fourth quarter."

Of course, there were other highlights, including Rip Hamilton's 26-point effort (fueled in part by a perfect 8-8 night at the line) as well as Tayshaun Prince's 21 points, but as many of you would expect I was most excited to see Delfino receive a solid 20 minutes of action. If the team is going to give Jason Maxiell DNP after DNP, at least one of the young players is getting some burn.

Both the Wizards and Pistons were playing their fourth game in five days, but the Pistons had the added disadvantage of playing on the road. No matter: they still found the energy to win a shootout. Of course, this game wasn't quite as close as the score suggests.

You know how when a team is losing big in the final minute they just keep chucking three-pointers when they have the ball and foul to stop the clock when they don't? Well, that's exactly what happened in this one, and as a result the two teams combined for 25 points in the final 59 seconds!

That's right: in the final minute the Wizards scored 15 points (one dunk, three consecutive three-pointers and a couple of jumpers, including one at the buzzer), but in doing so they also put Detroit on the line 12 times, with Rip going 1-2 and Chauncey Billups 9-10. The late action helped Chauncey pad his stats to finish with 29 points to go with five boards and seven assists.

Tayshaun had 21 points for the second consecutive night, shooting 3-4 from three-point land. He's shooting a career-high .487 from beyond the arc on the year while averaging a career-high 2.9 three-point attempts per game -- it's gotten to the point that I expect his open looks to go in this year.

Of course, we've known for years that Prince is untouchable once he heats up...No, this never gets old...

For the Wizards, Gilbert Arenas had 19 in the first half but only 28 for the game, though he did contribute 10 assists. Caron Butler, a thorn in Detroit's side the past couple of years, chipped in 25 points and eight boards. But playing four games in five nights is draining, and Detroit benefited more from a solid contribution from their bench: Washington got just 12 points out of their reserves while the Pistons had 32, including 10 from Antonio McDyess, nine from Flip Murray and seven from Carlos Delfino.

Detroit travels to Miami to face the dinged up Heat next, but they have until Thursday to get ready. It'll be in front of a national audience on TNT, and even though Shaquille O'Neal won't be playing, any game featuring Dwyane Wade is worth getting up for.

One more thing: remember those early-season struggles? They're getting smaller and smaller in the rearview mirror thanks to what's grown into a six-game winning streak. And for at least the next few days, they've moved back into familiar territory atop the Central Division, albeit still sharing the spot with the Cavaliers.