The Detroit Bad Boys word of the day is Schadenfreude

The honeymoon is over; can Ben Wallace and Scott Skiles save the marriage? 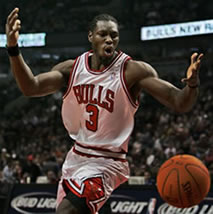 In case you missed it, Ben Wallace had himself a passive-aggressive hissy-fit on Saturday night. On the heels of an embarrassing zero-point, zero-rebound, zero-steal, zero-block performance on Friday in which he spent much of the second half on the bench, Ben took it upon himself to silently but publicly challenge head coach Scott Skiles on a Bulls team rule forbidding headbands.

Even though he's known about the rule all season, Ben wore his headband at the start of Saturday's game against the Knicks. Skiles didn't notice until two minutes after tipoff, at which point he pulled Wallace for Malik Allen. Wallace headed to the bench and defiantly kept his headband on for nearly eight minutes. From K.C. Johnson is the Chicago Tribune:

When Wallace finally removed it, during a deadball situation with 2:41 left in the first quarter, Skiles called for him to re-enter.

Wallace played the rest of the first quarter and most of the second. But then coming out of halftime, with the Bulls nursing a healthy 22-point lead and in prime position to end a grueling a six-game losing streak, Wallace again went out of his way to draw the ire of his head coach. From the Trib:

Wallace slipped the headband back on just before the second half was set to start. Skiles immediately sent Malik Allen to the scorer's table before play began.

When Wallace again removed the headband during a timeout with 5:46 left in the third, he re-entered just 81 seconds later.

Mind you, Skiles was actually ejected a minute into the third quarter after picking up a pair of technicals for arguing with the refs. Despite the fact his team ended their six-game slide, he probably wasn't in the best of moods when talking to reporters after the game. Nevertheless, both men tried downplaying the situation, albeit in a not-very-convincing manner. From the Trib:

Is Skiles' worried Wallace' insubordination will become an issue?

Is Skiles' worried Wallace' insubordination will become an issue?

Asked if he understood why he was benched, Wallace looked downward.

Don't let Skiles' nonchalance fool you -- this was a serious enough offense to warrant a 25-minute team meeting to stress team unity after the game. According to Johnson's reports from two people present at the meeting, Wallace didn't apologize. That shouldn't be a surprise -- he never apologized for his disappearing act at the end of that fateful game in Orlando last year either.

It's easy to disregard this incident as simply the frustration of a six-game losing streak boiling over, but reports out of Chicago suggest Wallace's frustrations with Skiles have been brewing ever since he signed the contract. Tribune writer K.C. Johnson writes:

According to league and Bulls sources, Wallace has felt unfairly singled out by team rules that have taken away his pregame music, his headband and his tape-free ankles.

Wallace left practice to get his ankles taped and, unaccustomed to being constricted, had trouble running and sat out most of the practice, the sources said.

Less than a week later, Wallace hooked his MP3 player into a docking station to play music in the locker room before the first home exhibition game. Asked then if he now allowed pregame music inside the locker room, Skiles said he was unaware any was playing.

By the next home exhibition game, Wallace had headphones connected to his MP3 player. The headphones hung from a hook in his locker, with the volume turned up so loudly that music clearly emanated from them throughout the locker room.

Several people within the organization, including players, theorized Wallace was marking his turf for what perhaps was an inevitable clash between two strong-willed men.

Interesting, eh? Mind you, this is coming from a player who lauded Skiles' discipline when he signed with Chicago, citing his in-your-face style of coaching as something all players need. But when push comes to shove, Wallace showed his colors: for a player who fashions himself as a consummate teammate willing to do whatever it takes to win, he has an awfully delicate psyche and is quite easily offended. He's been in this situation before, more or lessRemember his pouting in the midst of Detroit's incredible start last year?, but this time has to face an unforgiving media and fan base.

After a summer of hearing how the Bulls might contend for the NBA title, the Bulls have come out flat. And Wallace, whose numbers are down across the board, has become an easy target as a potential free agent bust. Some fans are already calling for him to be traded. Rick Morrissey suggests that Wallace has stolen the team's money.From Morrissey's column: "Ben Wallace's headband doesn't matter. Wallace's heist of Bulls funds does." Sam Smith riffed on Ben's slow start by piecing together a faux-retirement announcement a couple of weeks ago and is now calling for a fine or suspension -- not to mention all but accusing Wallace of fabricating an injury to excuse his recent poor play.From Smith's column: "Before this season started, Wallace in an ESPN interview blasted Saunders and commended all his former coaches, bringing giggles to all as Wallace had previously blasted them. He's an oversensitive, easily embarrassed, remote soul. I noticed him seeming to limp during the Friday game when he was benched and he was off for some MRI Sunday. His history, despite the supposed "warrior" mentality, is to come up with some small injury when things aren't going well to explain the issue, usually poor free-throw shooting."

Ben never faced anything like this in Detroit -- he was beloved by all of the fans and was the face of the franchise, and when he got creative with his headgear people thought it was hilarious.

In one of his mailbag columns for the Tribune, Smith's description of Chicago's locker room sounds like night and day compared to what Wallace was used to with the Pistons:

[This] is not a close team. It's not quite the old Red Sox of 25 guys and 25 cabs (now it's Hummer limos), but the players don't hang around together much and Skiles isn't a touchy-feely coach.

Coming from a team with a tight-knit core, Wallace must feel like he's in a foreign country. Remember, this is a guy who admits to calling Chauncey, Rip, Tay and Sheed during his negotiations with the Pistons and the Bulls this summer, seeking counsel from guys who weren't just co-workers but also friends. According to Smith's latest column, Wallace is still calling his former teammates, only this time he's griping about life with his new team:

The one question Pistons players say they have repeatedly asked Wallace is: Didn't he know where he was going?

This is the team Wallace chose.

That they offered about $12 million more over four years seemed to be Wallace's priority.

There's the rub, Ben. You proved this summer that everyone has a price, and you're learning this season that every choice has a consequence. Have fun counting all of your money, and here's to hoping your new team isn't completely gutted when they're forced to trade some of your promising young teammates to acquire that legitimate offensive threat down low they should have went after last summer.

I don't think Ben Wallace will be a problem-child for the Bulls all season, but I do expect Wallace's four-year decline to continue -- he faced similar questions early last year about Ben Wallace not quite being Ben Wallace, and sooner or later everyone should probably realize that he's simply no longer the player he used to be in 2003 or 2004. Most of the time when Wallace pouted in the past he'd come back with a vengeance for a nice stretch of games, but in the end there's no hiding that his numbers have steadily declined the last few years.

For Chicago, that's a tough pill to swallow, and they'll be swallowing it for another three seasons after this one. As far as I'm concerned, all that talk about Chicago being a legitimate title contender this year falls in the same category as the Pacers being a preseason favorite last year -- sports writers trying to outsmart themselves simply because they're bored picking the usual teams.