Share All sharing options for: Damon Jones does his best ‘Little Orphan Annie’

Just when you thought it was safe to start enjoying Cavs basketball, without all the rivalry-inspired hatred...

Forum punchline Damon Jones is the subject of an Akron Beacon Journal article describing his meteoric rise to the top! ((What does this phrase mean, anyway? Why was I compelled to use it? Isn't "meteoric rise" an example of poor astronomy? I'm a dork.)) And you think I'm joking:

In a year, Jones went from being a blue-collar role player in Milwaukee to the starting point guard on the flashy Miami Heat and a career season. In a whoosh, the undrafted former CBA player from Houston had a dazzling $16 million contract in Cleveland, a lucrative shoe deal with a Chinese company and all the status that came with it.

As I see it, on a team with Lebron James, this is akin to saying that "in a whoosh, Damon's hourly pay was bumped up to a dazzling $9.50 an hour and he was named the Employee of the Month at the Parma Wal Mart." 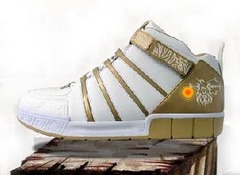 Don't get me wrong, I understand that being a beat writer is difficult, but are they so tapped of compelling stories after 14 games that they need to heap praise upon Damon Jones? Don't they know the dangers of this... how large his ego may become after seeing his name somewhere other than the clearance rack of a Chinese TJ-Max?

(This message brought to you by an unabashed Damon Jones-hater.)