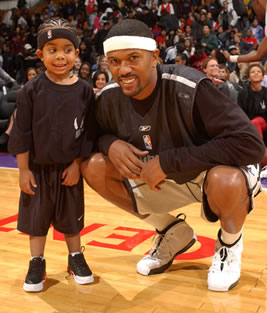 From Jalen Rose's first entry on his new blog at JalenRose.com:

As I tip-off my thirteenth NBA season, my focus is solely on winning - not just in the regular season, but in the playoffs. The last few years have been challenging for me and I've found a way to take the good with the bad. I've had numerous coaches and teammates over the past few seasons and as I join my sixth NBA team, I am excited to find a new home with the hope of some stability. I am eager to get back to a winning environment because that is what I know. God willing, I plan on playing this game for a few more years.

Being waived by the New York Knicks has created an opportunity for me to find a team to play on that will hopefully get me back into the playoffs with a realistic opportunity to win a NBA Championship. I am lucky and thankful to the numerous teams that have shown interest in me over the past few days, in particular Joe Dumars and my hometown Pistons and Pat Riley and the Miami Heat. Choosing the next chapter in my career has been difficult but I am proud to announce that I am now a member of the... PHOENIX SUNS. I look forward to getting this season started and hope to see you at the Larry O'Brien championship trophy presentation in June. The stage is set, now its time to grind!

I guess it's cool that Rose has his own blog, but I doubt he actually wrote that entry -- the first 1,500 words before the actual announcement is simply a recap of his career to date, as if anyone who cared enough to visit his site wouldn't already know his story -- despite being written in the first-person, it smells like something his P.R. guy put out there. But whatever, that's not the point: he's going to Phoenix.

What The Game Made Me, Not What The Fame Made Me [Jalen Rose Blog]