Share All sharing options for: Blue takes on Green 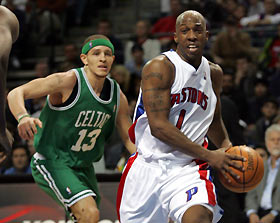 The Pistons travel to Boston trying to bounce back from an absolute stinker at home against the Bucks. But Boston also lost their first game of the year, so expect them to come out with just as much effort trying to get off the schnied.

Subplots: Well, Chauncey Billups was originally drafted by the Celtics before they unceremoniously dumped him midway through his rookie season. But I'm guessing any grudge Billups still harbors about that fact lies with Rick Patino, who isn't exactly a welcome figure around Beantown anymore.

Remember Rip's shot to beat the Celtics last year? Yeah, that was awesome.

It's OK to cheer for: No one, it's the freaking Celtics! But I do admit I always like to see Theo Ratliff, who was always fun to watch when he was with Detroit during some pretty lean years in the late 90's.

Be sure to watch for: The Celtics new dance team. It took a long time, but Boston finally caved, becoming the last team in the NBAI'm almost positive, though I'm too lazy to look it up at the moment... to realize that scantily-clad women enhance any sporting event. Wait... what?

Discuss that as well as anything else you want in the comments.