Weekend recap: "Maybe the sky isn’t falling after all" edition

Share All sharing options for: Weekend recap: "Maybe the sky isn’t falling after all" edition

It took six quarters, but the Pistons finally grabbed hold of their first lead of the season when Tayshaun Prince opened the third quarter with a fast-break dunk. Within minutes Detroit pulled away for good. Compared to the season opener, it was like night and day, especially when it comes to protecting the ball: Detroit finished with just six turnovers, 16 fewer than Wednesday. They also allowed just 34 points in the paint, less than half of their total from the opener.

But something else was different for Detroit after six lackluster quarters to open the season: Rasheed Wallace finally showed up. He had no points in the opener and just two in the first half on Friday, but in the final two quarters he scored 16 to help Detroit put this game well out of reach. When he's into the game -- not just in the game, but actually into the game -- this is a completely different team.

As for the Celtics, I surprised with how Wally Szczerbiak kept finding a way to score down low. He finished with 18. On the other hand, he also had six turnovers, so it's not like he was really carrying the Celtics. Also, point guard Sebastian Telfair started but was outshined by rookie Rajon Rondo -- I'll be surprised if they don't switch roles by the end of the year.

Last but not least: Boney is right. Sadly, Delonte West wasn't even born very ugly -- he did it to himself with all those ill-advised neck tattoos. (Not the best shot, but here's a partial view.) Be careful heckling him, though: as a rule, it's not a good idea to mess with someone whose idea of a good time is having someone else repeatedly stab his neck with a needle. And ladies: if rich guys with neck tattoos are you thing, well, Delonte is lonely and looking for love.

The Pistons lost the first quarter yet again but pulled away at halftime with a dominating second quarter. Things got a little tight in the second half -- the Grizzlies briefly tied the game in the fourth quarter -- but a 14-3 run to finish the game allowed Detroit to put the game on ice.

Five players scored in double figures, which is all the more impressive when you realize that did not include Chauncey Billups or Antonio McDyess. Billups, saddled with five fouls on the night, struggled with just seven points on 1-9 shooting from the field. However, he still got the job done getting everyone else involved as he finished with 10 assists and just one turnover. 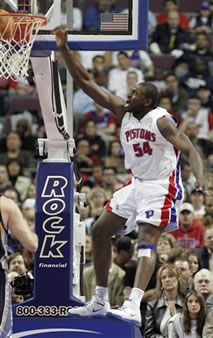 McDyess played just 13 minutes in part because of four fouls, and he missed both of his field-goal attempts. Fortunately, the rest of the bench picked up the slack as Jason Maxiell scored 13 (5-9 shooting) in 20 minutes. Detroit missed McDyess' rebounding (Maxiell had just two) but Detroit still won the battle of the boards with a 40-36 advantage.

I've already mentioned this at least once before, but this time I crunched a few numbers so bear with me: Rip Hamilton made a conscious attempt to establish his range last year, and as a result he led the NBA in three-point shooting by hitting 45.8% of his attempts. The downside, though, was just 3.8 free-throws per game -- his lowest average since his rookie year when he was playing fewer than 20 minutes a game.

In three games this year, Hamilton has made a conscious attempt to drive the lane, and as a result he's already attempted 23 free throws, hitting 20 of them (he went 6-6 on Saturday). That's an average of 7.6 free-throw attempts per game. Why is that important? Because in three games he's been able to average 25.3 points per game on just 16 field-goal attempts. To put that in perspective, he averaged 20.1 ppg on 16.5 field-goal attempts last year. Obviously, a huge caveat: sample size. But if he keeps going to the hole, he could easily average a very efficient 24 (or more) points per game. Start paying attention to his free-throw attempts when you look at the box score, this should be interesting.