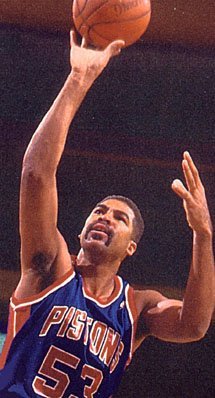 For the new school, James "Buddha" Edwards was a key player off the bench for Detroit during the 1989 title run and the starting center in 1990. He rarely played more than 30 minutes a game for Detroit and was almost never on the court during crunch time, but he was always the go-to player in the opening quarter, setting the tone early by establishing Detroit's presence in the post.

Sound familiar? ((Some of you may remember Larry Brown occasionally trying to do this with Ben Wallace a few years back. Of course, that drew mixed results; despite an earnest desire to score, Wallace's offensive game was very limited, especially when he caught the ball more than five feet away from the basket.)) Yes, it's early, (incredibly, incredibly early) but while watching Nazr Mohammed simply own the first quarter these past two games, I couldn't help but make the connection. On Friday, Mohammed stormed out of the gate with 10 points, five boards and two blocks in the opening quarter against the Celts. On Saturday, it was the same story: 12 points, three boards and a block. (OK, my analogy falls a little short when you add the season opener, in which Nazr accidentally applied butter on his hands before the tip instead of rosin, but hear me out...)

MLive.com's A. Sherrod Blakely asked Mohammed about his involvement early in the game:

"It is what it is," said Mohammed, who has never averaged more than 9.5 points per game during a season. "I haven't been able to do this since (being in) Atlanta and my time in New York when I was getting a couple touches, getting the ball. I've always shown flashes, when given the opportunity."

That's exactly what he's getting in Detroit. The Pistons are trying to get him involved in the offense as early as possible, well aware that his ability to score is a strength few of his previous teams have tapped into. 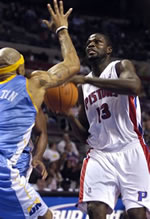 Also, consider this: Flip Saunders' favorite crunch-time lineup consists of Chauncey, Rip, Tay, Rasheed and McDyess. (And that's not new -- the Hack-A-Ben strategy dictated as much last year.) With that in mind, as well as McDyess' apparent preference to come off the bench, it makes perfect sense for the Pistons to look for Mohammed early in the game. And, just like you'd expect from any player, Mohammed seems to have stepped up his play knowing that his teammates will be looking for his No. 13 down low, just like a certain No. 53 used to do back in the day.

Mohammed has been an offensive terror in first quarters [MLive.com]