Will the Jazz strike again?

Share All sharing options for: Will the Jazz strike again? 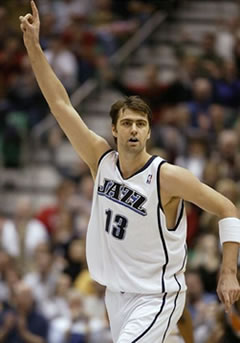 The Pistons set a franchise record with 64 wins last year, no thanks to the Utah Jazz. For whatever reason, Jerry Sloan's merry band of misfits had Detroit's number last year, defeating them handily in Utah before squeaking by again in overtime during the-rematch at the Palace.

The Pistons beat up the Jazz in the preseason, but the preseason counts for jack. Tonight, as the Pistons travel to Salt Lake City to kick off a three-game road-trip out West, is their first real chance for revenge.

Subplots: It's not just last year's games the Pistons are trying to avenge -- for whatever reason, the Pistons always struggle in Utah. In their last 16 trips to the Delta Center, the Pistons have won exactly two games.

Hey, it's Memo! Mehmet Okur, everyone's favorite Turkish unibrow, has blossomed out west -- he averaged 18 and nine last year. Man, he'd look good wearing Pistons blue. I can't blame Joe Dumars for letting him leave -- we couldn't have re-signed Rasheed Wallace had we matched the $50 million, six-year deal Utah gave Memo, and at the time re-signing Rasheed looked like the key to repeating in 2005.

Best nickname in the league: Hands down, the honor goes to Andrei Kirilenko and his moniker AK-47. He's Russian, it's his initials, it doesn't get any better.

Jazz owner Larry Miller: Local boy done good or bigoted businessman? Umm... a little bit of both? Not sure I want to touch this one, let's get back to basketball...

Talk about consistency: In this day and age of disposable NBA coaches, Jerry Sloan is serving his 19th consecutive year as head coach of the Utah Jazz. Think about that for a moment. Ever since Sloan coached his first game for the Jazz, Detroit has used (deep breath) Chuck Daly, Ron Rothstein, Don Chaney, Doug Collins, Alvin Gentry, George Irvine, Rick Carlisle, Larry Brown and Flip Saunders.

Reminder: the game starts at 9pm. Sleep is overrated, drink more coffee tomorrow. And feel free to share your pre-/in-/post-game thoughts in the comments below.