Share All sharing options for: Pistons lose in Utah… again. 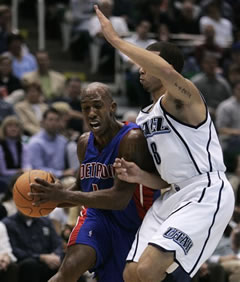 The Pistons lost a game in Utah. In other news, the sun rose in the east, politicians will solicit votes on TV today and Oliver Miller likes to eat.

What is it about Utah? The Pistons are now 2-15 in their last 17 games out there. Are the hotel mattresses lumpy? Is the Delta Center haunted? Do our players get lulled into a false sense of security by playing against a bunch of white guys? I don't have a clue.

What I do know is that Detroit lost a heartbreaker to the tune of 103-101, with Rip Hamilton missing a potentially game-tying layup as time expired. In Rip's defense, "missing a layup" is understating the situation -- he was driving against roughly 14 feet of Grade A shot-blocking ability in Andrei Kirilenko and Memo Okur, and his shot was definitely altered by one or both. But here's the thing: had Rip tied the game and Detroit gone on to win the game in overtime, it would have been an upset, at least considering how Detroit played for much of the game.

Yet again, Detroit spent much of the evening playing from behind, and the few times they did have the lead they never led by more than two points. Utah, on the other hand, led for three consecutive quarters by as many as 10 points before being outscored 30-22 in the fourth. That's a nice comeback bid by Detroit, but it wasn't quite enough. There were opportunities down the stretch, but time and again the Pistons didn't take advantage: in the final five minutes and change, Detroit had three turnovers, eight missed field goals and three missed free throws (two by Wallace and one by Billups). Despite some ticky-tack technical fouls earlier in the game (including one by assistant coach Dave Cowens that resulted in a four-point play earlier in the quarter), the Pistons had ample opportunity to overcome the officials and take the lead, but mistakes did them in.

Considering the Pistons lost by two, a lot of people are going to talk about Detroit's three technical fouls, so let me get those out of the way. Was Rasheed's tech in the second quarter B.S.? Yes, it was, but I disagree with Flip Saunders, who implied after the game that the techs were the difference in the game. That sounds like sour grapes to me: even without the three free throws, Detroit still gave up triple-digits on defense, still registered just 13 assists on 77 field-goal attempts and still threw away multiple opportunities down the stretch.

In case you missed it, here's what happened: in the second quarter, Rasheed hit a shot down low despite apparent contact. He immediately turned up court to play defense, but while doing so he stuck his hand in the air and yelled "And one," as a ref would normally do had a whistle been blown.

There's not a chance in hell that would have resulted in a tech last year, but Steve Javie felt empowered to make the call this year, even though Wallace's actions weren't disruptive and certainly didn't call attention to any particular official. Yes, it did reveal Sheed's displeasure with a non-call, but it did so in the most benign way. Saunders argued the call but only made things worse by getting a technical of his own.

Now, if David Stern was telling the truth when he said the new emphasis wasn't designed to remove emotion from the game, I have to believe he'll consider rescinding this one so that it doesn't count against Rasheed's season total, just like Chris McCosky suggests. But even so, that'd be a poor consolation prize considering it doesn't change the outcome of the game. Eh, whatever. Like I said, Detroit had multiple chances to make these questionable calls a moot point, and they botched it.

As for individual performances, Chauncey Billups was off all night: 10 points on 3-10 shooting from the field and four assists. Tayshaun Prince was damn near invisible with eight points in 36 minutes. And Rip Hamilton shot just 4-15 from the field to finish with 14.

The good news? On a night in which only one starter topped 14 points Detroit was still able to put 101 points on the board. Rasheed played a complete game, making his first real contribution of the season in the first half (14 points) to finish with 25 points, 12 boards and four blocks. He did his best to put the team on his back, playing inspired basketball even though he was clearly frustrated by the officials.

Nazr Mohammed continues to make the most of his playing time with 11 points, eight boards and two blocks in just 19 minutes. The bench played extremely well with Flip Murray (15 points, 20 minutes) and Carlos Delfino (eight points, four boards, 17 minutes) in particular seeing a good deal of action. Antonio McDyess shot just 2-8 from the field but turned in a yeoman's effort on the offensive glass, hauling in six offensive boards to go with a steal and a block. And just to cover all the bases, I should also mention Jason Maxiell, who missed his only official field goal attempt but scored four out of six free throw attempts. He's a beast when he gets down low, and he's doing an outstanding job drawing contact.

As a team, Detroit also outrebounded Utah 43-41, which is a feat in itself considering Utah's front line is one of the league's best with Kirilenko (11 points, eight boards), Okur (23 points, 10 boards) and Carlos Boozer (20 points, 11 boards). But while those three did basically what you'd expect from theme, Utah got a bit of a push from their bench, with Gordon Giricek shooting lights out (6-6 from the field) with 13 points in 17 minutes and Derek Fisher pitching in 12 points and seven assists in 25 minutes.