Share All sharing options for: Detroit Bad Boys is giving away DVDs 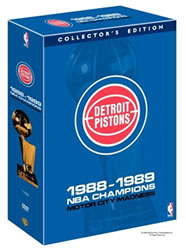 Last week I mentioned that the Pistons' 1988-89 title run was going to be released on DVD on November 14th. Not just the highlights, but 10 complete games of the original Detroit Bad Boys taking on Michael Jordan's Bulls in the Eastern Conference Finals and Magic and Kareem's Lakers in the NBA Finals.

Well, as excited as I was about having the chance to buy the box set, I about fell out of my chair on Monday when I received an email from a company helping Warner Home Video promote it. They wanted to know, would I be interested in giving away free copies to my readers? I couldn't tell them "yes" fast enough, and thanks to the wonder that is overnight delivery, I had a whole box of these things waiting for me on my doorstep yesterday afternoon -- a full week before they're even available for sale.

Which brings us to where we are now. How do we distribute these? Well, Ian and I put our heads together and we have a few ideas. We'll be running a series of contests over the next two weeks, with a new one announced every couple of days.

The first contest is easy.

To submit your entry, add your picture to the Detroit Bad Boys group on Flickr, and for good measure tag it with "DBBsign" email it to Matt and Ian. (We decided to keep things simple and forget about the Flickr stuff for now -- just email the pic and we'll take care of posting it!)

We're going to pick three winners for this contest!

The first one will be selected at random and announced soon after 3pm this coming Friday, Nov. 10 -- enter a picture before then and you have just as much chance to win as everyone else. Plus, you'll automatically be entered for the next random drawing, which will be at 3pm the following Friday, Nov. 17.

The third winner will be arbitrarily chosen based on the creativity of the picture. The deadline for this will also be 3pm on Friday, Nov. 17. Hint: The bigger the sign and the more public the place will earn lots of bonus points. If you want this free box set bad enough, I'm sure you'll think of something.

Any questions? Fire away in the comments. Lets see some pictures!