Share All sharing options for: Pistons roll into Sactown 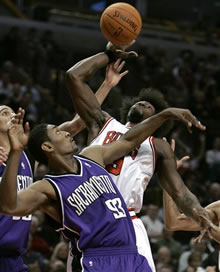 Subplots: It's easy to bill this one as Artest-Pistons II -- it's the first time Ron Artest has faced the Pistons since instigating the infamous Malice at the Palace in November 2004. But honestly, I don't think it's that big of a deal anymore, especially considering he's already kissed and made up with Ben Wallace last weekend.

For me, this is Pistons-Patton II. Who? Surely you remember: Leland Patton, the Kings director of event presentation, thought it would be funny to put together an extremely negative video montage of Detroit for the pre-game show featuring, among other things, abandoned buildings and burned out cars.

Talk about a bad day at work: the decision cost his employer a $30,000 fine by the NBA, not to mention the cost of full-page advertisements in the Detroit News and Free Press apologizing for the video.

Personally, I don't really hold a grudge -- just picturing poor Leland turn red and avert his eyes every time he passes Kings owners Gavin and Joe Maloof in the hallway is enough for me. But still, it's the first time since that game since the Pistons have played in Arco Arena, so it deserves to be mentioned.

Coaching connection: From the Sacramento Bee via Full-Court Press...

The Kings' coach and Pistons' coach go back in ways few within the NBA can claim. Musselman, in fact, hired Saunders as his CBA coach when he was the general manager of the Rapid City (S.D.) Thrillers in 1988. But after Saunders was fired one season later and Musselman took over the head-coaching position, the two faced off twice in the CBA Finals, with Saunders winning both series with his Lacrosse (Wis.) Catbirds.

Injuries: Detroit is close to getting Dale Davis back from a hamstring injury, but the moment Davis comes into the game in the second quarter instead of Jason Maxiell is the moment I throw my remote through my television set. The Kings just lost starting center Brad Miller for the next 4-6 weeks, which means extra time for the undersized Kenny Thomas, former Wolverine Maurice Taylor and maybe even former Piston Corliss Williamson. With any luck, Detroit's big men will take advantage down low, but it's also a big blow to Sacramento's offense.

What are they saying? Former NBA coach Kevin Loughery commentates that the Pistons should have the edge, while Sactown Royalty offers us this pre-game haiku:

Welcome to town, Sheed.
Given Stern's "no-sass" ruling,
I think you'll be hushed.

What to watch for: Can Chauncey bust out of his shooting slump? Will Rip continue driving the lane? Will Rasheed's head explode if he picks up his fifth tech in five games?

We'll see you in the comments for pre-/in-/post-game talk.