Share All sharing options for: Pistons bow to Kings

While previewing Wednesday's game against the Kings, I said:

The Kings just lost starting center Brad Miller for the next 4-6 weeks, which means extra time for the undersized Kenny Thomas, former Wolverine Maurice Taylor and maybe even former Piston Corliss Williamson. With any luck, Detroit's big men will take advantage down low, but it's also a big blow to Sacramento's offense. 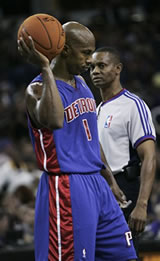 Well, there was no luck, as Detroit's starting frontcourt combined for exactly eight points on 4-of-23 shooting. Tayshaun Prince had six and Nazr Mohammed had just two. Wait, you say, that's only two players. I must have forgotten about Rasheed Wallace, right? Sadly, no; Rasheed failed to score in 36 minutes, going 0-9 from the field.

Considering Detroit failed to exploit Sacramento's glaring weakness in the middle, it wasn't a huge surprise to see them lose this game 99-86. No, the biggest surprise after watching the first quarter was that Detroit somehow finished the game with more than 50 points. Quite literally, no one was hitting anything in the early going: the Pistons had just four points more than nine minutes into the game and finished the first quarter with just 11, including eight from Rip Hamilton.

Antonio McDyess was of no use for pretty much the entire game -- he scored just four with one board in 23 minutes. With that in mind, I don't think I'm the only one who would've liked to see Jason Maxiell get a little more burn: Maxiell was a perfect 4-4 from the field in 11 minutes, hitting everything from a fast-break dunk to a nice jumper from the top of the key. He saw most of his action in the second quarter, which just so happened to be the only quarter Detroit won. Unfortunately, Maxiell picked up three fouls in that quarter, and after taking a seat on the bench late in the period he didn't get back on the floor until Flip Saunders conceded the game by emptying his bench with 90 seconds and change left in the game.

Nazr Mohammed was also saddled with foul problems with three in just 14 minutes, not to mention a technical for complaining. Even so, I'd have still liked to see him get a chance to foul out instead of simply ride the pine for most of the game. I admit, I didn't see much of the first quarter (no one did, I think, considering FSN was still showing hockey and ESPN showing overtime of the Phoenix-San Antonio game) but in Mohammed's short time on the court he made his only shot, grabbed two boards, collected a steal and blocked two shots. For all of his shortcomings (namely, not being Ben Wallace), he actually makes things happen on the court.

On a night that the Kings used 6-foot-9 forward Shareef Abdur-Rahim out of position at center, you'd think that Mohammed would have been of more use on the court than the bench. Saunders, apparently, had other ideas. Is there something else going on here that we don't know about? I know Mohammed fasted for much of the preseason -- is stamina still a big issue with him? Or, in an ironic twist of fate, is Saunders now guilty of underusing one of his starters?

The game wasn't without highlights for Detroit: Chauncey Billups laid to rest any concern of an early-season slump by scoring 25 points -- he shot 7-14 from the field, including 4-9 from beyond the arc. (Baby steps, people: put aside his four turnovers and four assists for now.) Of course, Chauncey was called for a technical in the first quarter for reacting to a double-dribble call. I don't know what was more frustrating: the fact he got the tech for walking away from the official or the fact that he had every reason to be upset considering the replays revealed his "double dribble" was actually a pretty sweet and 100% legal crossover move.

Plus, Rip continued his trend of getting to the line, finishing with 20 points after going 10-11 from the stripe. And despite shooting a miserable 0-9 from the field (and leading the team with five turnovers), Wallace still played an energetic game with 15 boards, two assists and three steals. Unfortunately, Sheed was the only guy on the entire team active on the glass -- no one else finished with more than five boards.

I've heard much more about Kevin Martin than I've ever actually seen, but it looks like the reports were right: the guy can flat-out score. He finished with 30 on 10-16 shooting. Mike Bibby, who's not in a gangSeriously, he's not in a gang at all., scored 23 with seven assists. And although I'd rather it wasn't in these circumstances, it was somewhat nice to see Corliss Williamson, oft-ignored in Sacramento, put up 15 points in 21 minutes. Am I forgetting anyone? Oh yeah, that Ron Artest guy: he scored 10 with nine boards and three steals.

So that's that. Detroit stands five game into the season with a 2-3 record. Are you worried yet? Don't be, unless you honestly think that Tayshaun Prince will fail to break double-digits in scoring in half of his games, Rasheed Wallace will be completely shut out twice a week and Antonio McDyess will shoot just 26% for the entire season. While you're at it, if you're ready to push the panic button you may as well crown the Atlanta Hawks (3-1) and New Orleans/Oklahoma City Hornets (4-0) as division champs, not to mention cross out the Dallas Mavericks (0-4) and Phoenix Suns (1-4) on your playoff bracket.

From a Detroit-centric point of view, it's easy to fall into the trap of thinking that a losing record after five games has significance, especially considering everyone from Monroe to Marquette has been paying extra attention to see if the Pistons flop after losing Ben Wallace. I think this team simply needs a bit more time to find a new identity. Some of the guys we know we'll be able to count on -- including Tay, Sheed and Dyess -- are starting slow, while the guys we hope will come through -- like Nazr, Maxiell, Delfino and Murray -- have impressed. That's not a bad combination, and certainly better than the reverse. There's still plenty of work to do (the first quarter has been a sore spot so far, the defense needs to tighten up and a middle ground needs to be attained with the referees), but none more so than any other team with 77 games left on the slate.