So Ben Wallace and Ron Artest finally buried the hatchet, with a little help from Jesse Jackson. From the Chicago Tribune:

"They embraced each other," Jackson said of the surreal scene in the Kings' locker room after the game in which the initial combatants in what became the worst brawl in U.S. sports history hugged and followed Jackson into the players' shower area.

Anywhoo, as we announced yesterday, we're giving away several of these DVD box sets of the 1988-89 Bad Boys title run. While we await the winners of the ongoing photo contest,Hey Ron: things are certainly looking good for you -- you're the only entry so far! we thought we'd put another set on the line this afternoon. So take a look at the picture below and tell us this:

What are Big Ben and Ron Ron saying to each other? 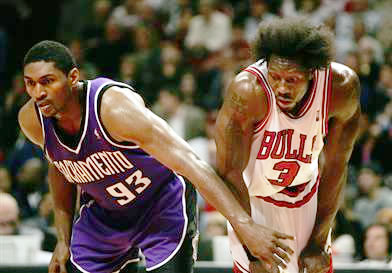 Give us your best in the comments. And at this time tomorrow, we'll announce the winner and send him/her this awesome prize. A couple of lucky (?) runners-up will receive a copy of this month's Dime Magazine (I know, it's not a set of DVDs, but we need to give the rest of these mags out before they're officially obsolete...).

Look, we've made it really easy for you with this picture. I mean, when combined with the whole "Jesse leading them into the shower" image, your mind should be in just the right demented state to take home the prize. So have at it!