Pistons pull rabbit out of hat against Magic

Share All sharing options for: Pistons pull rabbit out of hat against Magic 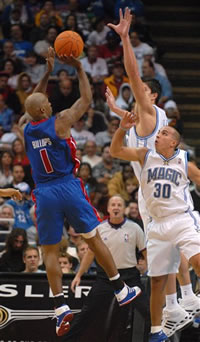 We're two-plus days late on this, so we'll keep it short.

After pulling his right hamstring on Thursday, Chauncey Billups had us worried that he'd be forced to sit out Friday's game against the Magic. Well, crap, not only did Billups play but he came out shooting the lights out. He scored a season-high 31 points, making up for the fact he also finished with just three assists.

Playing the second game of a back to back (again -- man, we've seen a lot of those alreadyNot that it's negatively affected the Pistons so far -- they're 13-1 when playing games part of a back-to-back set and 0-6 in games with a day off before and after.), the Pistons needed to rely on the bench, and fortunately the bench came through. Jason Maxiell, who got into just one of the previous eight games, was given 17 minutes. He finished with just four points and one rebound, but it's worth noting that the Pistons were a +2 with him on the floor compared to a -11 with Dale Davis in the game.

Same goes for Carlos Delfino: just one rebound and no points in 12 minutes, but he held his own defensively (he was right at 0 in terms of +/-) and gave Rip Hamilton and Tayshaun Prince a chance to catch their breath.

As much as we give Flip Murray a hard time, he deserves plenty of kudos for his performance, scoring 13 points with three assists. He saw 30 minutes of action and played extremely well in crunch time: it was his jumper that gave Detroit an 82-80 lead and it was him assisting Rip Hamilton on a pair of short bunny jumpers to officially put this game on ice.

The Pistons trailed for much of the second half but took control for good with a 10-2 run late in the fourth. They made the game closer than it should have been with five missed free throws in the final three and a half minutes (including two apiece by Murray and Billups), but Orlando just couldn't get over the hump once they lost their momentum. Nevertheless, Billups was quick to praise them after the game:

``Right now, they are the best team in the Eastern Conference,'' Billups said. ``We knew they were going to come out fresh. They made a quick run and we withstood that.''

Former Piston update: Darko Milicic had four points, five boards and a pair of blocks in 24 minutes. For a while leading up to the game it looked like he might start, but Tony Battie played through illness and remained in the starting five. Carlos Arroyo had nine points, five boards and one assist in 16 minutes, shooting just 2-7. Grant Hill scored 12 with four assists in 33.