The (non-rival) Pistons and Pacers square off

Share All sharing options for: The (non-rival) Pistons and Pacers square off

Are the Pistons and Pacers still rivals? Chris McCosky says no, which lit a fuse and set off an explosion of resentment by at least one bitter Pacers fan at PacersPundit :

If Pacer fans hate the Pistons, it must be scapegoating, right? There couldn't be, you know, like a real reason. Is there some scapegoating? Sure. Do some Pacer fans blame the Pistons for everything that's gone wrong with the team. Probably. But this makes it seem like the Pacer fans are have no reason for their hate for the Piston organization. Oh, we have one big reason to hate them.

Read the whole entry for the rest of his rant post. Maybe he's right, maybe the Pacers did bear the brunt of the punishment for the brawl, which in turn set off a tailspin from which the franchise never really recovered. 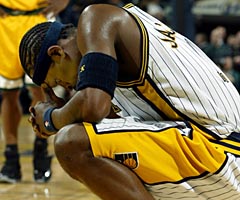 But I'm curious ... did the brawl convince Ron Artest to ask for time off last year to promote a rap album? And did the brawl make Donnie Walsh wait seven weeks before trading Artest -- seven weeks in which the Pacers were without one of their top two players? Was it the brawl that made Stephen Jackson think it'd be a good idea to bring a gun to a strip club? Or for Jackson to get in Rick Carlisle's face and earn a team suspension this year? Is the brawl responsible for the fact Jermaine O'Neal has apparently peaked and is on the downward slope of his career before even turning 30? Did the brawl make O'Neal extremely injury prone?

Seems to me like the Pacers have made a series of bad decisions over the years and blaming the brawl is easier than blaming the beloved duo of Donnie Walsh and Larry Bird. Artest and Jackson went into the stands throwing haymakers -- they got what they deserved. O'Neal ended up being suspended 15 games, and the Pistons and Pacers were each sporting 12-12 records upon his return. Seems like a wash to me. It's all of the problems since (by the same players: Artest and Jackson) that have really set this franchise back, both in terms of how they play on the court as well as how they're perceived by fans around the league.

Sadly, I'm running out of time and I never found a way to work in a reference to Cornrows blog, a Pacers blog that is actually quite good and worth a look -- if you're looking for a less inflammatory viewpoint from the opposing team, check them out.

So I leave you with that. Pistons and Pacers tip-off in about 10 minutes -- enjoy this non-rivalry game and leave any game or (any brawl-related) thoughts in the comments.