Pistons go two for the weekend

Share All sharing options for: Pistons go two for the weekend

Things have been slow around here this weekend with Ian recuperating from law school exams and me recuperating from, well, a little too much "eggnog" on the holiday party circuit. But it's nice to see the Pistons have kept their nose to the grindstone with wins in New Jersey on Saturday and at home Sunday. 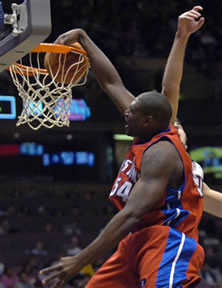 The team was without Rasheed Wallace in both contests, but outstanding efforts by Dale Davis and Jason Maxiell made up for it. In fact, the common theme between both games was outstanding bench play. A lot of Pistons fans, including DBB, have railed against Flip Saunders' substitution patterns in the past, but he coached this weekend like he was finally privy to Joe Dumars' long-term vision by giving the bench significant minutes, not just in terms of quantity but also quality. Guys like Will Blalock, Carlos Delfino and Jason Maxiell were in the game at critical junctions, and for the most part they all responded positively.

But the most surprising outcome of the weekend wasn't watching the youngsters develop. Rather, it was seeing 15-year pro Dale Davis turn back the clock to the prime of his career. He hauled in nine boards in 25 minutes against the Nets and 13 in 22 minutes against the Sonics.

What's even better, we learned that the duo of Davis and Maxiell is not an either/or proposition -- the Pistons actually seemed to play best with the two on the court at the same time. It worked like clockwork on both ends of the court: the two provided tough as nails defense in the low-post, worked their asses off chasing offensive boards and not once ended a possession early with an ill-advised three-point attempt. (Sorry, Rasheed...) 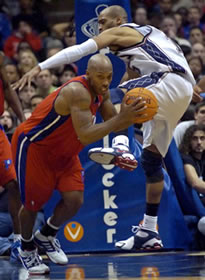 Focusing on the New Jersey game for a moment, Chauncey put forth an MVP-worthy performance with 27 points, 11 assists and five steals. Rip added 26 points with five boards, but nobody else broke double-digits scoring. Antonio McDyess' line in his first start of the year was uninspiring (28 minutes, four points, 2-6 shooting, five boards). Tayshaun Prince shot just 3-12 on the night to finish with 7 points, but he obviously did something right on the other side of the ball as Vince Carter (12 points) and Richard Jefferson (11 points) were basically non-factors.

This game was tied at 82-82 with two and a half minutes left, but the Pistons scored the final eight points to put this game on ice. Blalock played in place of Billups for about the first seven minutes of the fourth. Billups came into the game with about five minutes left, and in the final 2:30 he scored twice, picked up a couple of steals and dished out an assist. Although Blalock's line for the night wasn't that great, the Pistons were +8 with him on the court, which allowed Billups to rest up for that final surge. (Just for comparison's sake, Flip Murray was -7 -- if that's not an indication that Blalock deserves an honest to goodness chance to be the backup PG, I don't know what is.)

OK, to recap the Sonics game I'm just going to re-post what DBB reader Tim wrote elsewhere in the comments . Kudos to him for taking the initiative, he pretty much sums up what I would have said... everything below (in addition to the above J-Max/Baby Eater reference) is his words:
---

Pistons grind one out at the Palace tonight to defeat the not so Supersonics (no Ray Allan) 97 - 93. Coming off a tough back to back in NJ the starters came out with a combination of fatigue and sub-five-hundred-itus to the tune of a ten point deficit. Flip went to his bench early, and just like in NJ, they delivered. During the second quarter Jason "Baby Eater" Maxiell and Dale "Fountain of Youth" Davis dominated the glass at both ends coming up 1 offensive rebound short of a single quarter team record.

As a result of incredible rebounding from the bigs, the pistons finally got free in the open floor. The Pistons went into the half with a one-point lead, and a gaggle of points in the paint.

The bench continued their excellent play in the second half when Dale and Max entered the game half way through the third. Baby Eater reminded me of another undersized athletic player that relies heavily on heart and hustle. Time and again Max and Dale gobbled up every loose ball eventually racking up a combined 25 boards, and an amazing 16 offensive boards. On the offensive end Rip and Billups attacked the basket exposing Seattle’s woeful internal defense.

The game came right down to the wire with Jason Maxiell hitting a huge 11-foot jumper to put the Stones up two with under six seconds to go. The Sonics wouldn’t score again and the Pistons walked away with a win to extend their record to 15-8 and take the lead in the central. They also continued their bizarre habit of winning the second half of back-to-backs.

Max finished the game with 17pts, 12reb, 8orebs, 2stls, and 2asts in 32 minutes to give him his first double-double in a reg. season game. - Half way through the third he looked liked he was going to pass out.

Dale finished with 13rebs, and 6pts in only 23 minutes.

Max and Dale weren’t the only bench guys to make an impact. Blalock and Carlos also contributed with their energy and timely steals (Thumbs). Flip "#1 option" Murray also threw in 11 point on 3 for 8 shooting, and his usual horrific defense.

McDyess continues to struggle finishing with a donut on 0 for 5 shooting. He also turned the ball over left and right even though he was only credited with one. He mishandled passes, lost easy rebounds and generally looked out of sync.

These last two games without Ra have put the bench on display for extended periods for the first time this season. I think you may start seeing a lot more of Jason and Dale out on the floor together. They give our frontcourt a physicality and work ethic missing since the departure of you-know-who. Blalock proved that he can handle the offense and stay under control to give Billups a rest. He’s not a scorer but he makes good decisions, stays in front of his man, and pushes the ball (three things you can’t say about Flip).

I can’t wait to see the new "we have a heart" Pistons play again. Too bad their next game isn’t until after the all-star break!

--
[Ed: OK, it's Matt again -- hats off to Tim for taking the the time to do that. As he alluded to, due to the quirky schedule, the Pistons follow this back-to-back series with another strange four-day layoff. The next game will be against Cleveland in front of a national audience on TNT. Sheed is expected back for that one, but hopefully we'll still see a lot more of Maxiell and Davis on the court at the same time.]