Share All sharing options for: Same story: Pistons down Cavs with second-half defense 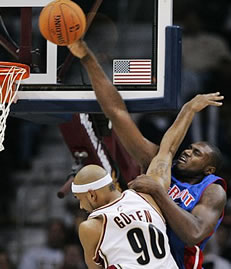 The full recap is up over at the 'House, but here's a taste to whet your appetite:

Fans in Cleveland have to be asking themselves right about now: we waited seven months for this? In a nationally-televised rematch of a bitter playoff series from last May, the Pistons used the same recipe that worked in Game 7 last May: keep it close early and dominate on defense late.

Detroit held a 42-41 lead entering halftime before shutting Cleveland down the rest of the game. Both team struggled in the third quarter but Detroit opened the fourth with a 20-5 run and finished with an 87-71 victory. Despite struggling with his shot for much of the game, Chauncey Billups kept gunning and ended up scoring 12 of his 17 points (with four of 10 assists) in the fourth. It was the same for Antonio McDyess, who scored all 11 of his points while playing the entire final frame.