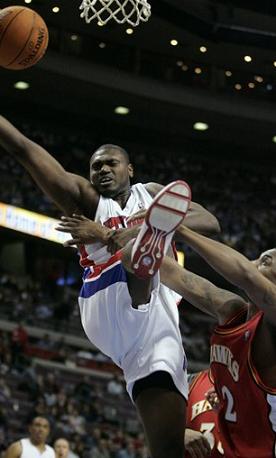 Like a prize-fighter who knows his opponent's been bought, the Pistons carried the injured Atlanta Hawks team for a half Saturday night. But with a strong second half made possible by contributions from just about everyone, the Pistons KO'd the Hawks, 108-81.

Some odd stats from this game: Detroit was outrebounded thoroughly by the Hawks, 47 boards (24 offensive) to 38 (11). But the Pistons more than made up for the difference in shot opportunities by blocking 16 Atlanta shots. Jason Maxiell and Antonio McDyess led Detroit with 3 each, but 7 Pistons had 2 or more.

Overall, it was a well-rounded, methodical ass-kicking that saw Nazr Muhammed putting up 19 with 10 boards for his most impressive Piston performance; Maxiell continuing his assault upon the league, complete with a four-point possession and another posterizing dunk; and Will Blalock scoring his first NBA field goal. The game was never in doubt, and so 10 Piston players saw at least 15 minutes of floor time; no starter played more than 29. Impressively, with all those bench minutes, all those disparate lineup combinations, the Pistons still only turned the ball over 7 times.

But, with Atlanta missing five rotation players -- Tyronn Lue, Josh Smith, Josh Childress, Speedy Claxton, and Zaza Pachulia -- well, to paraphrase Harvey Keitel in Pulp Fiction, "let's not start [slapping] each other's [backs] just yet." This game was as assured a win as you'll find on the remaining schedule.

Nevertheless, a win is a win is a win, and if you clearly outclass your opponent, then you might as well let the final score reflect that fact. A few favorite moments:

10:29 Tay is racing side-by-side with Royal Ivey as Ivey makes his way towards the hoop on the fast break. Tay seemingly cedes the layup to Ivey only to leap up at the last minute and throw it backwards. Royal Ivey, you just got Tayshaun'd.

0:11.4 Maxiell's enters the game with little over a minute left in the first quarter. His first field goal attempt is relatively uncontested and yet he still throws it down as if he's trying to crack the floor underneath. He's a manimal.

10:29 Maxiell is fouled by Marvin Williams on a vicious tomohawk attempt (which, incidentally, he misses). After the foul, Williams stares off blankly, a glazed look in his eyes. Williams' look suggests bewilderment, as if he'd just seen the new Transformers movie trailer and was marvelling at the potential for awesomeness that he had just witnessed.

3:30ish It is always fun to watch what players do with the ball on the offensive end after the whistle stops play, whether it's a spot up three, a dribbling display, or -- as was the case here with Nazr Muhammed -- a highlight reel dunk. It won't show up in the box score or on the video highlights of the game, but Nazr is one incredibly athletic big man. After a light-hearted, unguarded, dead-ball jump into the lane, the quickness with which he brings down the hammer is something to see.

10:10 Nazr Muhammed is not Bill Laimbeer. After grabbing a rebound and seeing Tayshaun Prince streaking out on the fast break, Nazr fires a 90 mile-per-hour bullet pass right into the basket support on the other end. Not exactly a Laimbeer-esque outlet pass there. The camera pans to the Piston bench, and everyone is laughing... except for Flip Murray... who hates freedom.

5:25 Jason Maxiell will eat your children. Do you understand this, Lorenzen Wright? I only point this out because Wright just fouled Maxiell flagrantly in a desperate attempt to save himself from the "Jason Maxiell: Good Eats" mix tape coming out after this season. Since the Pistons get the ball back, on the same possession Maxiell grabs an offensive board after a Flip Murray miss and scores (and 1). Again, manimal.

Yes, the Pistons undoubtedly play in the worst conference in professional sports, so being the best of the lEast could be construed as "damning with faint praise." But the Pistons can only play who's on the schedule, and right now, they are playing everyone tough.

Likewise, so is everyone in the Central Division. While the Eastern Conference at-large continues to be the butt of jokes, the Central Division has quietly mounted a challenge for the title of "best division in basketball." With the Bucks, Bulls, and Pacers having righted their respective ships, the entire Central Division is now holding down playoff slots at this very early juncture.

The Pistons are off for the holiday but return to the Palace on Tuesday night for --what's this!? -- another back-to-back set! This time it's against the Nets and then off to the Garden to face (for the time being) Isiah's Knicks.

Whether it is Christmas, Hanukkah, Kwanzaa, Festivus, or just a nicely placed three-day weekend, Happy Holidays from us to you. Cheers.