Share All sharing options for: Marathon match: Knicks over Pistons in three overtimes

Last night's game with the Knicks wasn't supposed to happen. I'm serious. This was just another midweek matchup against an allegedly bad team. Detroit was supposed to come into Madison Square Garden, punch in for 48 minutes and leave the building with a win.

On paper, this game had all the appeal of sandpaper. Maybe you planned on catching a few minutes of it when House went to commercial, maybe you hoped to see some highlights later in the evening or maybe you figured a glance at the box score (and a visit to this blog) the next day would tell you everything you needed to know about the game.

Whatever the case was, I'm willing to wager that not once did you consider that this "boring" Wednesday night matchup between the Pistons and Knicks might become something fans will still be talking about 10 years from now. But it was.

151-145. Three overtimes. Two buzzer beaters. Fifty-one points from Rip. Two-hundred ninety-six points scored. And in the end, one heartbreaking loss. But above all, one hell of a game.

Things were close the entire game, and even though both teams ripped off impressive runs at various points, the other team always found a way to cut things close by the end of the quarter: the score was always tied or within one point at the close of the first six periods of play.

From the perspective of a Pistons fan, it was frustrating to watch the Boys in Blue Red make countless mistakes down the stretch. If you're the finger-pointing type, there's plenty of blame to go around:

But you know what? The hell with it. This was still a great game. Detroit made up for their low shooting percentage by killing the Knicks on the offensive glass: Detroit finished with 27 offensive rebounds; New York, 11. And yeah, I think Rip was fouled on his last drive, but Pistons fans are in no position to complain about a no-call. 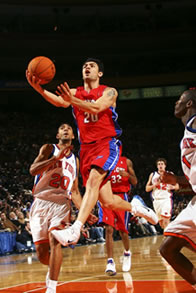 And how about Carlos Delfino? The Dolphin finished with 16 points (6-8 shooting; 3-4 from long distance) in 30 minutes, including a three-pointer at the end of regulation to push this game into overtime. He was only credited with three boards and two steals, but he always seemed to be in the thick of things whenever there was a loose ball on the floor. DBB reader Rocky Cliffs said it best:

He’s been all over the court recently. Not just scoring, but rebounding, scooping, dishing, other cool "ing"s. I think he’s finally won me over.

When Rasheed fouled out, Flip Saunders showed a lot of confidence in Delfino by allowing him to play all but 37 seconds of the first and second overtimes.

And did you see Nazr Mohammed? In 30 minutes of burn he pitched in 18 points and 14 boards, including eight offensive. On a night in which Rasheed never had his touch and Jason Maxiell played less than three minutes (more on that later), Nazr was Detroit's most consistent low-post option. He hit little running hooks with both hands and was a big reason why Detroit was outscored in the paint by only six points (66 to 60) despite the fact 300-pound Eddy Curry was camped out in the lane and Stephon Marbury was slicing his way to the basket all night long. The same goes for Antonio McDyess, who scored 15 (eight in the fourth quarter), seemingly getting all of his points on put-backs and tap-ins. 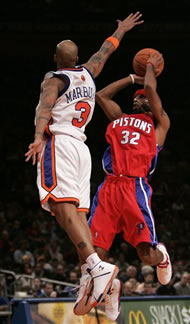 Last but certainly not least, there was Rip Hamilton's career night. He was Detroit's most consistent option the entire night, shooting 19-37 from the field and 12-12 from the line. He all but put the team on his back in the second overtime, scoring 10 of Detroit's 15 points. On a night in which many of his teammates were settling for horrible three-point shots (Tayshaun Prince finished 1-7 from long distance, Rasheed 0-4, Chauncey 2-9), Rip feasted on midrange jumpers and drives to the basket, attempting (and making) just one three-point shot.

With all of the excitement, how did Jason Maxiell get lost in the shuffle? It's hard to say, but it's worth mentioning that Detroit was outscored by 11 points in his only three minutes of action before embarking on a 12-2 run immediately after he was pulled. Of course, not all of that falls on him, but he's an undersized power forward and the Pistons were getting absolutely destroyed by the 6-11, 300-poundGo ahead and believe his listed weight of 280 if you like, but there's no way this guy is under three bills. Eddy Curry, who scored 21 in the first half before finishing with 33 for the game. Maxiell offers length, but the Pistons needed size, and those two things aren't always the same.

Since I've mentioned just about everyone else I should add that Will Blalock continues to deliver in the backup point guard role while Flip Murray continues to wilt. Murray did get into the game for four minutes, in which time he managed to commit three turnovers and three fouls. Saunders is finally putting his "players determine playing time" mantra into action, and Murray is doing all he can to take himself out of the regular rotation.

For the Knicks, I'm both impressed and disappointed by Curry. Yes, he's fat, but that's the point. He can go wherever he wants to on the court and there are only a handful of players in the league strong enough to do something about it. He shot 11-15 from the floor, with the vast majority of his shots coming within five feet of the rim. On the other hand, he remains an extremely sub-par rebounder: in 54 minutes he had seven boards, which is a disgrace given his aforementioned ability to position himself anywhere he wants. 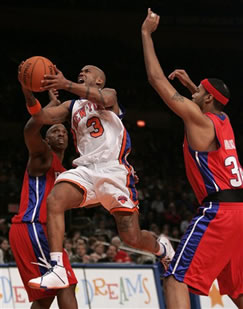 Marbury was a thorn all night long with 41 points and eight assists in 51 minutes, and Jamal Crawford took the torch when Marbury fouled out, finishing with 29 points and 11 assists in 53 minutes. And, I want this on the record, David Lee can play on my team any day. He's relentless on the boards and always provides energy. He finished with 11 boards and 13 rebounds in 46 minutes.

I don't buy into any supposed disgrace to losing to the Knicks: yes, they're under .500, but since that little skirmish against the Nuggets a couple of weeks ago they've won four of their last five, including three overtime games and three games against legit contenders (Utah and Chicago being the other two). Isiah Thomas has made some bad trades the last few years, but some of the moves he's made don't look nearly as bad in hindsight (ie, trading for Curry, drafting Renaldo Balkman) as they did when everyone was laughing at him. Given the potentially dire situations in Philly, New Jersey and Boston, I won't be all that surprised if the Knicks flirt with .500 this year. Sounds crazy, don't it? I know, but not nearly as much as it did a month ago.

If you're still reading this you've probably figured it out -- this was one fun game to watch. A win would have been nice, but now that I've had a few hours to cool off I'm not exactly too torn up about it. The Pistons got a gift from the refs on Tuesday and had karma bite them in the ass the next night. This would have been a good time for one of those four-day layoffs they've been subjected to this year, but at least they have a day off before taking on the Pacers at the Palace, and then another day off before hosting the Suns on New Years Eve.