Pistons try not to overlook the Bobcats

Share All sharing options for: Pistons try not to overlook the Bobcats 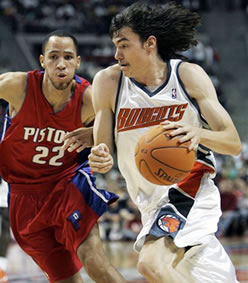 Matt Carroll! The backup off-guard looked like an All-Star against the Pistons when they faced each other just over a week ago, scoring 16 points in 20 minutes. I feel silly even saying this, but the Pistons can't let that happen again.

Emeka Okafor. Not only does he slightly resemble Taye Diggs, he's also one of the top centers in the league. He's not nearly as dangerous when forced out of the low post (on offense and defense), so here's to Rasheed, Nazr and Dale pushing him out of the post.

Looking ahead? In the midst of an eight-game winning streak, here's to hoping the Pistons don't get caught looking past the Bobcats tonight (or the Blazers on Tuesday) to their prime time, nationally-televised matchup with the Mavericks on Thursday.

Weak kittens? Yes, the Bobcats have a ridiculous 4-12 record, but among the teams they've defeated are three likely playoff teams: Cleveland, San Antonio and New Jersey (with the lowly Celtics thrown in for good measure). This is without a doubt a game the Pistons should win, but this game is in Charlotte and both teams are rested, so a strong effort will be required nonetheless.

As usual, leave any game thoughts in the comments.