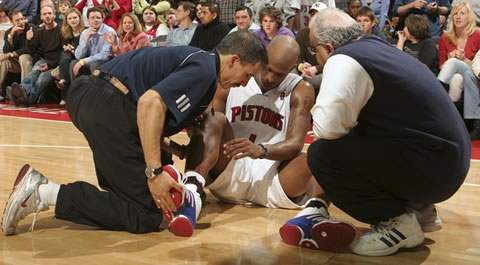 Ouch. From the AP:

Detroit Pistons guard Chauncey Billups is expected to miss up to two weeks with a strained right calf, which he suffered in Friday's 93-92 loss to the Indiana Pacers.

Billups sustained the injury when he fell after hitting a 3-pointer with 18 seconds remaining in the game. He was helped off the court by team officials.

"When I saw the rebound come out, I kind of went to plant and take off to go after it," Billups said. "I felt a pop in there a little bit. When I went to take off to shoot, I was like, 'I just can't move.'

"So I hurt it before the shot. I knew it wasn't a cramp because I've gotten cramps before and I would have been able to come back. We just have to monitor it and see."

Everything else seems secondary at the moment, but before we examine the implications of Billups injury (ie, stop banging your head against the wall for two minutes) let's take a moment and discuss the first 47 minutes and change of Friday's game.

Early on, this was a game of runs. The Pistons trailed 12-2 in the opening minutes before a 28-8 run helped them to a 15-point lead. Soon after, though, Detroit's offense fell stagnant in the second quarter, and on the heels of a 16-2 run near the end of the half the Pacers actually clawed their way back to enter the break with a slim one-point lead.

The Pistons could never get back over the hump, and for the second game in a row sloppy play down the stretch doomed them. The Pistons missed three free throws in the final two minutes -- two by Antonio McDyess and one by the allegedly usually clutch Billups.

The Pistons were down four when Billups heaved up that three with 17 seconds left, but after some give and take (two free throws by Stephen Jackson, one layup by Rip Hamilton), the Pistons had Rip on the free throw line trailing by two. Make. Make. Tie game.

The Pacers had just enough time to heave the ball from underneath the Pistons basket three-quarters of the court to their free throw line, where Jermaine O'Neal tipped it to Darrell Armstrong. Almost in one motion, Armstrong recovered the ball, gathered himself, and sold Carlos Delfino on an upfake. Disaster. The Dolphin came crashing down on Armstrong, giving him two chances to break the tie from the free-throw line.

Miss. Make. Rasheed Wallace still had time to inbound the ball with a throw down court in a desperation attempt to mimic the abso-freaking-crazy play the Pacers just pulled off ... but his throw was a little too much Joey Harrington and not enough Peyton Manning, landing out of bounds on the other end of the court. Game over.

So there we have it, the Pistons are on a two-game slide, dropping games they had ample opportunity to win on both nights. It didn't happen much last year, but anyone who's watched the NBA for very long knows that teams have weeks like this. The Pistons have gone 15-5 in their last 20, and four of those losses (Charlotte, Portland, New York, this one) are games I'm convinced Detroit either should have won or very easily could have won Not to mention those one and two-point affairs against the Hornets and Jazz in the midst of that 3-5 start -- if you can get past the frustration, that's not a bad early-season body of work.

Believe it or not, there were some positives to take from the loss. Delfino made an absolute bone-headed mistake at the end of the game, but he otherwise played very well and was instrumental in making the game so close in the first place. He played 23 minutes (including the entire second quarter) and scored nine points with seven boards. In fact, he had two boards in the final 28 seconds, including an offensive rebound (and an assist) to set up Billups' dramatic three-pointer.

Rip Hamilton scored 21, or 30 fewer than his outburst in New York. He was limited by foul trouble and sat for much of the third quarter, which allowed Flip Murray to get into the game. No, really, Flip played in this one. I'm serious. I know it was hard to tell he was on the court at times, but take my word for it, he shows up in the box score: 10 minutes, zero points, 0-2 from the field. He did record an assist and a steal, but he also committed a turnover and two fouls. And to think, this guy is probably going to get some serious burn with Chauncey out. Long exhale.

Rasheed Wallace was held to just 21 minutes because of the flu, and the Pistons would have been better off had he skipped this game completely: the Pistons were outscored by 26 points with him on the court. For the second time in just over two weeks, he was outclassed by his former pupil, Jermaine O'Neal. Rasheed finished with six points and seven boards, while O'Neal led the Pacers with 25 points and 13 boards (including six in the first six minutes of the game).

Antonio McDyess (four points, five boards, one block in 17 minutes) and Jason Maxiell (12 points, four boards, one block in 27 minutes), on the other hand, each played well and finished +18 for the night. It's awfully dangerous relying on the +/- stat in basketball, but we're talking about a 44-point swing between those two and Rasheed. Oh well: hindsight = 20/20.

Like I alluded to above, the details as to how this one went down are inconsequential compared to how the Pistons are going to get by for the next 10-14 days with their All-Star point guard. And, in a cruel twist of fate, whoever starts at point guard for Detroit will be immediately compared to the cream of the crop, as reigning two-time MVP Steve Nash and the Suns arrive on Sunday afternoon for a New Years eve matinee at the Palace. The last time the Pistons faced the Suns, Chauncey outscored Nash 35 to 13 while leading Detroit to a win (which, coincidentally, was the win that officially clinched the No. 1 seed in the East for Detroit).