Share All sharing options for: Can the Pistons close out 2006 with a win? 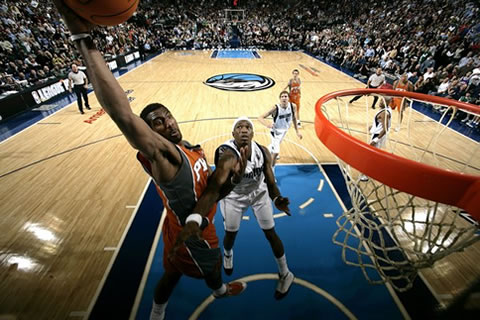 Chauncey Billups is out, Flip Murray is in. And as if replacing the team's captain wasn't hard enough, Murray will be going up against reigning two-time MVP Steve Nash.

The Suns lead the NBA with 111.3 points per game, but they also give up 104. The last thing the Pistons will want to do is turn this into a track meet, but there should be at least a few opportunities for some easy scores. Amare Stoudemire is pictured above, but the guy I'll be paying extra attention to is Shawn Marion. Watch this guy tonight, then ask yourself, why can't Tayshaun Prince put up numbers like that? I know the points are a function of the team's pace, but how about the blocks and rebounds?

Ugh. They just showed Chauncey Billups wearing street clothes. I'm feeling ill. In any case, the ball just tipped -- the game is also being shown on NBA TV, for anyone not in Detroit. As usual, leave any game thoughts in the comments.