Share All sharing options for: Offended Bobcats upend Pistons (and a weekend recap)

There are very few things that I enjoy on a Monday morning.

One is my customary six cups of coffee. Another is seeing the Lions steadily improving their draft position while side-stepping total embarrassment. And definitely amongst the Pantheon is seeing Matt's customary 4-in-the-morning "Pistons go two for the weekend" post. Well, I'm on cup number four; the Lions still suck just enough to lose close games to good teams; but unfortunately, the Pistons' gaudy 8-game win streak was haulted last night by those pesky Charlotte Bobcats, 97-89, negating the "two-fer" post.

Yes, Charlotte added the Pistons to their premiere pelt collection, which already includes wins over Cleveland, San Antonio, New Jersey. For a team that has only won five games on the year, they do tend to save their best for the best. How'd they do it? 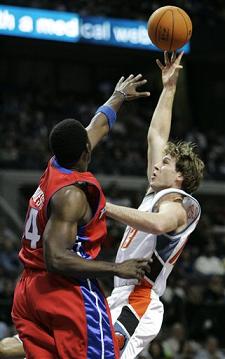 The main Bobcat weapon against the Pistons? Again, one Matt Carroll. Carroll, with 16 points last night, is now averaging 16 points on 65% shooting in two games against the Pistons (well above his season numbers of 6.7 and 48%). For good measure, the Bobcats added 18 and 17 from former first-rounders Emeka Okefor and Sean May (respectively), but it was Carroll who came to kick ass and chew bubble gum (and was almost out of gum). Carroll, after a short time learning what a microphone was and how it worked, had this to say in his public speaking debut:

"Tonight I came off screens looking to shoot the ball and the big guys set some good screens and the guard we're getting the ball to me at the right time."

Enthralling. (And to make matters worse, he attended Notre Dame.)

In addition to their heightened level of play, it seems the Bob-kitties' level of sensitivity was kicked up a notch for last night's matchup. From the Detroit News:

"That team (the Pistons) did not shoot-around today," Bobcats guard Brevin Knight said. "We take notice of things like that."

I have to admit, my first instinct after reading this quote was to poke fun at Charlotte for their hyper-sensitivity. But as a fan of the Pistons, it would be pretty hypocritical of me to do so. After all, it was the Pistons back in aught-4 who put their own spin upon the "disrespected underdog" tale, defeating the Lakers to win their third championship. And I had no problem revelling in "shock the world" tactics then. So be it.

As for the Pistons, Sheed continued his quest for world domination, leading Blue in points (19), boards (8), and blocks (2). Rip Hamilton, held scoreless in the first half (mainly due to foul trouble), redeemed himself with 17 points in the second half. But there wasn't nearly enough offense to stay with the Bobcats; the Pistons shot not-quite 41% from the field and less than 24% from 3-point range (Sheed, Tay, and Chauncey combined to go 2-15 from beyond the arc) and generally looked a step slow all night.

Flip Saunders refused to blame the schedule for the loss in today's Free Press:

"I don't know if our tank was empty, but I know we played empty," coach Flip Saunders said. "We didn't play with the sense of purpose that we needed."

That's cool that Flip is still working on his "hardass" image, but one glance at the schedule -- which includes games in Miami, Detroit, and Charlotte in four days -- suggests that this loss could very well be a "schedule loss." And if that is the case, aren't you glad it was to the Bobcats rather than the Heat? Moving on.

The Pistons withstood the Knickerbockers' best punch on Friday night, but they still stood at the final bell. In their eighth straight victory since starting the season 3-5, the Pistons fought a balanced offensive attack from the Knicks with hot shooting from three of their could-be All-Stars. Tayshaun Price tied a career high with 31 points (including 6-7 from three). And Rip Hamilton dropped in 26 (including a perfect 11-11 from the line). But Chauncey Billups had possibly the stat line of the night, with 22 points (on 8-9 shooting) and 16 assists. Chauncey, who was not happy with his struggles against the Heat the night before, took to punishing all eight of the Knicks' point guards.

Meanwhile, Sheed, countered a poor shooting night (6 points, 3-12 from the floor) with 15 rebounds, 2 blocks, and 1 technical foul. Silently, Sheed has a real chance of averaging a double-double for the first time in his career, and the case can be made that he is the Pistons' MVP this season.