Pistons vs. Blazers and the NBA Playoffs

Share All sharing options for: Pistons vs. Blazers and the NBA Playoffs 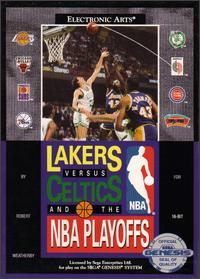 ...is what EA's first 5-on-5 basketball game for Sega Genesis should have been titled when it was released in 1990.The MS DOS version, released in 1989, could have been entitled "Lakers v. Pistons and the NBA Playoffs," but we're not playing the Lakers tonight, are we ?

But instead, we were force-fed the pointless title of "Lakers v. Celtics and the NBA playoffs.""Pointless" because the two teams hadn't met in the playoffs since 1987-88. The following year, when the finals featured Magic and Jordan (NBA darlings compared to our rough and tumble Pistons), the title was changed to "Bulls vs. Lakers and the NBA playoffs" to represent the teams that actually met in the finals. The next year the Blazers would receive some redemption for the slight, with the release of "Bulls vs. Blazers and the NBA Playoffs."

Sadly, the Bad Boys never made it back to the finals before before the franchise was renamed "NBA Showdown" in 1993.

So as the Pistons and Blazers rekindle their battle of 1990 tonight,Or, as noted Blazer-sympathizer Henry from TrueHoop might call it, "Danny Young's last stand." think of all the youths wearing Piston blue who were denied a chance to see their favorite team on the cover of this classic gaming franchise. (And, yes, I remain bitter.)

As always, leave your in- and post-game insights in the comments.