Sheed to Dallas, "Remember me?"

Share All sharing options for: Sheed to Dallas, "Remember me?" 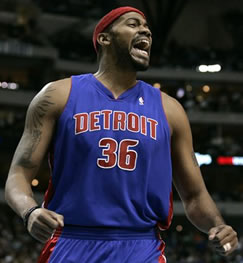 If Tuesday's loss to the Blazers was significant enough to warrant the negativity that resulted (mostly from me, mind you), then last night's 92-82 victory in Dallas merits a momentary standing O.

With questions surrounding their desire, their defense, and their place amongst the league's best, the Pistons went out and proved last night that -- just as they can play down to any opponentApologies to the Bobcats and Blazers -- this is not intended as a slight; only to say that both teams have a ways to go before joining the league's upper echelon. Besides, you can use the "scoreboard" retort. That one always shuts me up. -- they also have the ability to take it to the teams who will be standing in the way of Title #4 come summer.

"A lot of people consider Dirk and those guys the best power forwards in the league. I just want to let them know that I'm still around. I haven't gone anywhere."

I think they get the point, Rasheed. On second thought, perhaps it serves the team best if Sheed continues to feel disrespected/forgotten about/underestimated/whatever it is he feels when compared to Dirk/KG/The Big Fundamental. His performance last night, complete with yelling "POW" after each of his five threes, was the most effective, most animated game he's played in a while. But if big-time performances against big-time opponents fire him up and encourage him to do the same come playoff time, who am I to complain about the occasional zero point performance against the dregs? Chauncey's with me on this:

"I wish we played against elite teams every night -- for our sake and for Sheed's."

Of course, that Dirk fella isn't too bad either. The Diggler turned in a 29 point, 9 board performance of his own, proving his place amongst amidst the top 4s is warranted. In addition to the win, Rasheed left the building with 19 points (including 15 from beyond the arc) nine boards and a pair of blocks. Usually we'd give Sheed a hard time for heaving up eight three-pointers, but he made five of them, compared to going 2-6 from two-point land. That might bite him in the ass later, but we'll take it here.

Even Flip Saunders was feeling the spirit after last night's win. For a guy prone to throwing his boys under the proverbial bus in postgame comments following losses this season, it is nice to see him heaping praise.

From the Detroit News:

"Anytime you can come in and you can hold Dallas, in their building, in the 80s, you're doing something right," Saunders said.

Of course, Flip could privately be doing a bit of self-congratulatory back-patting himself after the performance of his zone defense last night. As DBB reader Tim put it in the game thread:

But, the real winner last night was the zone defense. Even when they were playing man, it was a kind of hybrid zone. Dallas had no idea how to attack it. It’s going to get harder and harder for players to hate on the zone after a quality win like that.

Your daily dose of "The Dolphin"

Everybody got into the act last night... errbody. Check out Dyess' sweet pass to a cutting Carlos Delfino for the slam. (Thanks Tim, whose thumbprints are all over this post, for the video link.)

It was nice to get this W in the books, especially displaying such strong defense on the road and forcing an elite team like the Mavs to change their usual style of play. That said, it did come at a cost: Chauncey Billups pulled his hamstring.

And there's no rest for the weary. After taking on the cream of the West, the Pistons return to the East in a showdown with some familiar faces (Carlos Arroyo, Darko Milicic, Grant Hill, and the DeVos family) and the rest of the Orlando Magic. As hard as it would have been to believe a month ago, this game is as every bit of a measuring stick as last night's game as the Magic have easily posted the best record in the East. Should be a good one.