Share All sharing options for: Pistons sweep up Cavaliers in spite of an inspired performance by Damon Jones

The Pistons beat King James and the Cavs last night, 84-72, at Quicken Home Loans Arena. The "wine and gold"--as the Cavs are referred to by their announcers (thank you, NBA League Pass)--answered my questions about their toughness by playing the Pistons close for three quarters. Zydrunas Ilgauskas even exacted a bit of revenge for Sheed's skull-cracking, knocking him to the floor with a hard foul in the first half (which sent the Cavs' broadcasters' hearts all aflutter). But, alas, in true championship form, the Pistons clamped down in the fourth and drained the Cavs of their will to live. The Boys in Blue dominated the fourth, 20-9, to take home their second W versus the Cavs in 36 hours.

There's plenty of praise to pass around for this one: Chauncey with another double double (15 points, 12 dimes); Sheed with 24, going 4 of 8 from three; Ben with 12 boards and limiting himself to three (failed) shot attempts. But there's one man who stood out amongst his peers to define the divide between the Pistons and Cavs. That man...is Damon Jones.

Damon Jones displays a consistency only dreamt of by most NBA fans. While we lament over Sheed going 1-13 one night and 8-17 another, Cavs fans know every night exactly what to expect from "the monster that Shaq created." Kenny Smith of TNT--who already had a history with Jones--used these exact words to describe Damon Jones during the All-Star slam dunk contest, who had somehow scored courtside seats for the contest in order to show off his new Tomato-red suit. We will forever be in debt to you, Kenny.

Case in point: Sunday afternoon saw Damon drop an energetic zero on the Pistons, while dishing out three dimes and grabbing two boards in 23 minutes. Breathtaking, really. Then last night at "tha Q" (you'd shorten your arena's name too if it were named after a dot com), Damon again hung a big O on the Pistons, while doling out a single dime and snatching four boards in 22 minutes. The man is automatic! 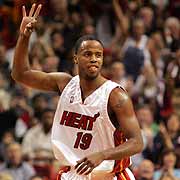 Now I know there has been a lot of "hate" on here recently, but allow me one more rant. Simply put, Damon Jones pisses me off. The trash-talking, the flash without substance, and especially that little three-finger salute he throws up after every three--its enfuriating. My contention is that, with Jones, the Heat could have run away with the "most-hated" title in our recent poll. I'm not alone in this; aside from Kenny Smith's documented dislike, Jones is also one of the most hated players in blogosphere (see here, or here, or here). And I'm sure we all had a good laugh when Chauncey started throwing three fingers back Jones' way against the Heat in the playoffs last year.

But for all his annoying antics, it is important to distinguish Jones from guys like Bruce Bowen and Andres Nocioni, who irritate while making their teams better. Jones, and his combined 45 minutes of nothing against the Pistons, does nothing to make the Cavs better. The old playground adage is this: "put up or shut up." Damon Jones does neither.