Share All sharing options for: Is Chris Webber coming home? 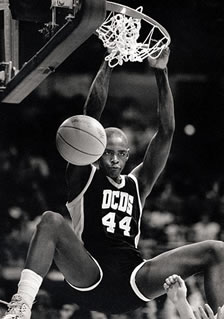 While the Pistons were dismantling the 76ers last night, Philadelphia's front office was putting the final touches on Chris Webber's buyout. According to published reports, he's now a free man (though, perhaps still an injured one -- he's missed nine of 12 games with a foot and ankle problems). He still has to clear waivers, of course, but he will, since any team that claims him would be on the hook for the massive contract the Sixers are buying out.

Webber's Detroit connections will make some people wonder if he's finally coming home to play for the Pistons. Personally, I don't see it happening -- the last thing the Pistons need is another player taking minutes from Jason Maxiell. I suppose it might be worth thinking about if he'd be willing to play center, but he's made it clear his entire career that he prefers to play the four.

Noted rumor-monger Peter Vecsey claims Isiah Thomas would like to bring him to New York, and that may or may not be true. But Webber has reportedly told the Sixers that he wants to play for a contender. From the Ft. Worth Star-Telegram (thanks, Nick):

Despite his diminished production this season, Webber figures to command a lot of interest from the league's elite teams. The list of possible suitors would also likely include San Antonio, Phoenix, defending champion Miami, Detroit and others in need of a battle-tested veteran once considered among the best in the league at his position.

That article also states that he's looking for serious minutes. All things considered, I'd like to throw another team into the mix: the Chicago Bulls. I made my case about this yesterday on the FanHouse:

Most people seem to agree that the Bulls are a scoring big man away from being a true contender, but the Bulls might not want to trade one of their core youngsters to acquire such a player.

While Webber may not be able to score 25+ night in and night out like he used to, he's an excellent ball-handler, could help Ben Wallace on the boards and would make the Bulls much more dangerous down low. Plus, Chicago's offense is slow enough that it won't be clogged up by Webber, who's stuck with a bum set of wheels for the rest of his career.

Webber has started 777 of 779 career games, and Chicago is the rare contender that he could immediately slide into the starting lineup. Andres Nocioni is a very fine player, but he's undersized to be a consistent four in the NBA and may be better-suited coming off the bench, where he can play both the three and the four.

Bear in mind, I've never read anything linking Webber to the Bulls, but given their situation and what he's looking for, doesn't it make the most sense? Or would you rather the Pistons pursue him? State your case in the comments.