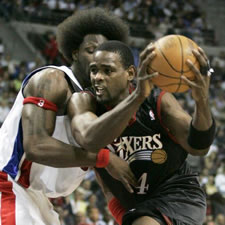 According to ESPN, the Pistons are on Chris Webber's short list of teams he hopes to sign with once his buyout with Philly is official and he clears waivers:

Webber told ESPN.com on Wednesday night that 17 of the league's 30 teams have already called to register interest in his services, but the free agent-to-be hopes to sign with one of the following contenders: Miami and his hometown Detroit Pistons in the East; San Antonio, Dallas and the Los Angeles Lakers in the West.

"This is the best I've felt in three years," Webber said in a phone interview. "Now the thing I want to do most is win a championship, put myself back on that kind of level."

Looks like my Chicago theory is being blown to bits. Of those five teams, Webber says that the Mavericks have the least to offer him in terms of playing time and that the Spurs are the least likely to want him. So for the sake of discussion, let's narrow the discussion to three teams: Miami, Detroit and Los Angeles. Read the article for arguments for the other team, but here's the excerpt that pertains to Detroit:

The Pistons, sources said, immediately thrust themselves into the running, intrigued by the idea of adding the local legend as they continue to revamp their front line in the wake of Ben Wallace's free-agent defection to Chicago.

I said before that I don't think he's the best fit for the Pistons, but the more I think about it (and the more I realize it's a genuine possibility) the more I'm willing to just roll with it for the sake of nostalgia. I'll be honest, I still have a Fab Five t-shirt in my wardrobe, and although it's getting a little threadbare and pit-stained after nearly 15 years of use I still can't bring myself to throw it out.

Is signing Webber the most rational thing to do? No, not at all, but I'd pay money to watch him play in a Pistons jersey, and I'm sure there are thousands of people across Metro Detroit who'd say the same thing. Considering he'll likely sign for the veteran's minimum, the increased attendance would provide an automatic return on the investment alone. Yes, he'll probably be a roadblock to Jason Maxiell's playing time, but maybe he could actually teach Maxiell a thing or two about how a big man can contribute in the passing game.

Plus, if the Pistons are able to sign C-Webb, Joe Dumars could then trade Dale Davis (or, and I hate to even bring this up, Antonio McDyess) without hesitation. Webber and Davis are hardly the same player (one plays defense, one doesn't), but Davis' expiring contract is probably far more valuable to another team than his seven minutes a night or whatnot is to the Pistons, and I'm still in love with the idea of packaging him and Flip Murray for a genuine backup point guard.

Sure, bringing Webber on board is a gamble, but it'd be a really cheap gamble and it'd certainly generate a lot of buzz. If it doesn't work out, well, the Pistons didn't lose anything for trying and can still pursue a trade. Let's face it, the Pistons as currently constructed are treading water at best -- they were frequently guilty of playing uninspired ball even when Chauncey Billups was healthy. Signing a player who's actually excited about playing in front of the hometown fans is a no-lose situation, especially if his his enthusiasm turns out to be infectious.