The "Morris Peterson to the Pistons" rumors

Share All sharing options for: The "Morris Peterson to the Pistons" rumors 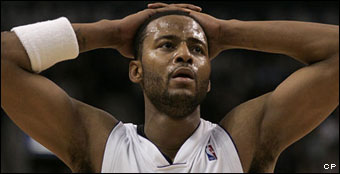 You know those Morris Peterson to Detroit rumors? He's just as much of a hometown kid as Chris Webber, and instead of leaving his college program in shambles he stayed all four years and left a champion. So why haven't I been as excited about those rumors? It's easy: I'm not buying them at all.

Don't get me wrong, I wouldn't be surprised if the Pistons have legitimate interest in acquiring Peterson, but I don't know how the Pistons could get him. There's been talk that Detroit might deal Antonio McDyess (trade kicker and all) if Webber signs, but why would Toronto want him?

That's a team building around Chris Bosh and Andrea Bargnani, and they're currently filling the gaps with solid role players like Jorge Garbajosa, Kris Humphries and Rasho Nesterovic. Whether you want to admit it or not, McDyess is probably the fourth-best big in that group behind Bosh, Bargnani and Garbajosa, and considering the Raps seem reluctant about starting Bargnani right now, McDyess would be Toronto's second big off the bench, probably seeing no more playing time than he is right now for the Pistons. That's true now, and it'd be even more true next year assuming McDyess doesn't opt out of his contract.

If it's not McDyess being offered but Dale Davis, the playing time argument holds true, except (like Peterson) Davis will be a free agent at the end of the season, which makes the deal slightly more palatable for the Raptors. But I still think on the open market, with about a dozen teams interested in MoPete, the Raptors could do better.

If the Raptors move Peterson, they'd likely be looking for a wing player in return, not yet another big man. The Pistons have little to offer in that department aside from Carlos Delfino, who's young, cheap and still improving, a combination rarely seen on Detroit's roster. Even if the Raptors wanted him, I'd be surprised (and disappointed) if the Pistons gave him up.

Peterson has been the subject of trade rumors all year, and it's only recently that the Pistons have been mentioned. So why are they entering the picture did Detroit enter the picture now? If you're the conspiracy theory type, it's false hope leaked to keep people from talking about the Flip Saunders/Rasheed Wallace disconnect. Maybe so, but I think it's purely derivative of Detroit's (alleged) status as the front-runner for Chris Webber: C-Webb's arrival would almost certainly mean one of the team's other big men would be on their way out, so people are suddenly getting creative looking around to see who's available while putting together hypothetical deals.

Do I want the Pistons to add Morris Peterson? I don't think he's needed given Delfino's emergence this year, and it'd make much more sense for the Pistons to clear out their front court by acquiring a legitimate backup point guard. That said, he is a talented guy who plays both sides of the ball, so as long as the Pistons didn't sacrifice a young player (Delfino, Jason Maxiell, one of their first-round draft picks) I wouldn't be terribly disappointed.

I just doubt it will happen.