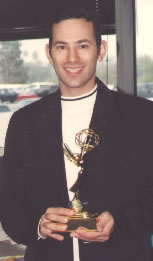 Elie Seckbach, "the embedded NBA correspondent," has been covering the NBA since 1997, but in the past couple of months his popularity has exploded among NBA fans -- as he once told Tim Thomas, it took him 10 years to become an overnight sensation.

Why did it happen now? The Internet. Through YouTube, thousands of fans are now able to watch his quirky and candid interviews, where he catches NBA players off guard with his off-the-wall questions. (My favorite? The Hanukkah one at the bottom of this post.)

I began exchanging emails with Elie a couple of weeks ago, and since then he's been the subject of discussion everywhere from Sports Illustrated (Andy Gray called him "about the most entertaining NBA reporter out there) to Free Darko (Bethlehem Shoals: "Is Elie bad for Jews who like the NBA?") to the Washington Post (Post title on the Sports Bog: Wiseacre Kid Takes Video Camera Into NBA Locker Rooms, Asks Silly Questions).

On Monday, Elie was a guest on The Basketball Jones podcast, discussing his newfound fame, how players and other reporters perceive him and how covering the NBA differs from some of his more serious assignments. If you're a fan of his videos, I strongly suggest you give it a listen.

For more from Elie perspective, here is the results of our email conversation -- I'd like to thank Elie for taking the time.

Matt Watson: A lot of fans are just now discovering your videos, but you've been covering the NBA since 1997. How did you get your start? Do you remember the first player you ever interviewed?

Elie Seckbach: I came to America from Israel to play college basketball. During the summer of 96’ one of my teammates tried out for the NBA and took me with him, I decided to interview Lamond Murray and a young rookie named Derek Fisher. I sent in the article to a few leading papers in Israel and one of them, Hazofe Daily, picked it up. From there, the rest is history.

MW: What college did you play for?

I played for Los Angeles Valley College, one of the top JUCO programs in Cali. [Ed. -- Says here: "During the 1996-97 season, Seckbach was voted the "Most Inspirational Player" while the team won the Western State Conference."

MW: What organizations do you work for?

ES: I am now working with dailynews.com. Make sure to stop by and check my videos it out. I have also worked for CBS 2 News, FOX 11 News, Israel National News, Hazofe Daily, Arutz 7 (radio in Israel).

MW: I love the "behind the scenes"/"gonzo journalist" feeling of your videos, and I think that's largely because you film many of them yourself. How long have you been doing that?

ES: Almost as long as I have been reporting, I’d say eight years. A picture says 1,000 words. Let me explain, take me losing the bet to Kobe Bryant where I had to knock out 400 push-upsEd: You can see Elie holding his end of the bargain in the opening of this video., or me going nose to nose for hours with Shaq dropping Yo Mama lines. If you just read it in an article, without a video, would you believe me? Or would you think I have a wild imagination. At times I work with crew, a producer and cameraman, at other times I do shoot my own stuff.

MW: You seem to have a really good rapport with so many of the players you interview -- I'm thinking about Kobe Bryant, in particular. How come so many players seem to be more candid and relaxed with you than other reporters?

ES: I am not Stone Phillips, I don’t have the vocabulary of a Harvard Graduate. I’d say being yourself goes a long way. Add to that the fact that I have been around all these years and have gained the trust and respect of people I see hours at a time -- it’s something you have to earn.

Some of my best stories were taking an all-night bus from LA to Sacramento, packed with hard-core Lakers fans to watch a King-Lakers playoff game, just to arrive at the arena and hang out with Joe Maloof.

Another funny story: one time Mark Madsen locked himself out of his own car with the engine running. This was the morning of the Lakers championship parade (the second championship team) -- there were 300,000 people outside of the arena. I called AAA guided them in and got Madsen his car open. Covering five Shaq birthday parties was also an experience.

MW: Which players have been the most fun to interview?

From those who are no longer in the NBA, I’d say, Lawrence Funderburke, who was with the Kings and Bulls. He always had great behind the scene stories. He even wrote a book called Hook Me Up Playa about the lives of professional athletes. Gary Trent was guy who told it like it is -– you have to appreciate that.

MW: In recent years, Team USA has failed to win in international competitions despite boasting All-Star rosters, and just this past preseason we saw the 76ers and Clippers lose to teams from Span and Russia, respectively. It's obvious the rest of the world takes basketball just as seriously (if not more so) than we do in the U.S.

In fact, just this past June, Raanan Katz -- who owns a stake in both the NBA's Miami Heat as well as Israel's Maccabi Tel Aviv -- said if he could choose between another Euroleague title for Maccabi or a first NBA title for the Heat, he'd choose the former. Is basketball the most popular sport in Israel? Do basketball players who play in Israel have just as much star status as current NBA players?

Israeli’s love Americans and love sports, and if you're a professional athlete you’re the local celebrity. There are a few NBA players who played in Israel (Toranto's Parker and Indiana's Jasikevicius). If you asked them -- and I have -- about their experiences in Israel, given the world we live in, with all the threats and security issues, they have only the best things to say. Parker was in Israel for five years and Jasikevicius married a local girl. And that says it all.

MW: I found it remarkable that a player like Maceo Baston, who's had great success playing in Israel, almost turned down an NBA offer to remain with Maccabi Tel Aviv this past summer. Eventually he held out for a two-year deal from the Pacers, where he's reunited with Sarunas Jasikevicius, another former Maccabi player who signed a three-year contract in 2005. And it's not just bench players making the jump from Israel: Anthony Parker, who bounced around the NBA from 1997-2000, dominated with Maccabi the last few years before signing a three-year contract with Toronto and starting every game this year. Are there any other players you think will make the jump in the next year or two?

ES: For sure, you might recall these names from the draft: Lior Elijah, he’s with Maccabi and grew up in Jerusalem, and a player named Yotam Halperin. I also think Amit Tamir has a shot. [Ed. -- Elijah was a second-round pick by the Rockets; Halperin, a second-round pick by the Sonics. Tamir played for the University of California and is currently playing in Belgium]

MW: Who do you think are the most popular NBA players in Israel?

ES:In Israel people like teams: the Lakers, the Kings, the Heat, the Pistons. As far as players, I would say Kobe Bryant. It used to be Michael Jordan. Shaq is also very popular, so is Wade and Artest. I remember about six years ago two kids from Israel came with the Make A Wish foundation and their dream was to meet Shaq -- he showered them with gifts.

The NBA as a whole is the favorite pastime, people have home parties to watch the games live - when it’s 4 a.m. out there. I have to admit the fans in Israel are very knowledgeable about players, stats, much more that what you’d expect. They follow their teams religiously.

MW: Have you been a basketball fan all of your life? Who did you grow up rooting for? Who did you pretend to be when shooting hoops as a kid?

ES:I grew up playing basketball from when I was five years old -- there’s not much going on in the West Bank. I was on teams until I came to Los Angeles. The last year there I played for was Maccabi Jerusalem. Most of my friends come from the basketball world, former players and coaches, people I grew up around.

I used to root for Maccabi Tel Aviv and a team call Elizur Natanya. They had five American-born players on the team and I never saw that type of run-and-gun basketball. Much different than what I was used to, which was the slow-motion Russian style of play -- pass, pass, pass, run around the top of the key and then release a jump shot.

MW: Fans have a lot of choices these days in terms of who they want to give their attention: the mainstream media will always have a certain degree of appeal, but now there's also a lot of high-quality fan-generated content such as blogs, podcasts and videos. You're one of the "pros," but you kind of fall into both categories given your recent popularity on YouTube. Are there any non-mainstream sports sites that you visit on a regular basis?

ES: I check sites out all the time. Some on MySpace, I check out BenMaller.com -- he always cracks me up. I check out detroitbadboys.com and of course Miss Gossip on AOL Sports Blog. Each morning I start my day by reading at least four different newspapers online (mainstream) just to see what’s going on in the world. Even if you’re a sports reporter, you should always have a quest for knowledge -- thanks to the Internet, I can do that.

MW: Any predictions for the playoffs this year?

For more videos, check out Elie's YouTube page as well as the Los Angeles Daily News.