Pistons, Jazz and the dawn of the Chris Webber era

Share All sharing options for: Pistons, Jazz and the dawn of the Chris Webber era 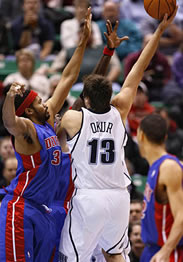 The first one hurt. Remember the first time Detroit played Utah? What a disaster: a two-point loss with former Piston Memo Okur swatting a Rip Hamilton layup at the buzzer. Utah still has one of the better records in the NBA but they've played .500 ball in their last 24 games and are losers of four straight. And their fans are getting antsy -- from the usually even-keeled UtahJazzBlog.net

The Jazz have lost four in a row. I was so upset watching yesterdays game that I would have punched a baby. I am glad that my nine week old child was nowhere near.

A new starter in the middle? Not yet. Flip Saunders said yesterday that Chris Webber will play but won't start. I'm guessing they want to give him a few more days so he can digest the playbook.

Mr. Big Shot's return. Chauncey Billups participated in an entire practice yesterday for the first time since injuring his calf. From the Freep:

"We scrimmaged a little, but we didn't go up and down much," Billups said of Tuesday's workout. "It was a lot of half-court, execution stuff. So it gave me a chance to bump and grind a little bit, get a sweat.

"But as far as full-court, we didn't do too much. That's the only thing I'm really concerned with. But it felt good, and I'm happy just to be out there a little bit, so hopefully it feels good in the morning."

By now I'm sure the Pistons know whether or not he's going to play, but he was still considered questionable as of yesterday afternoon. If I hear of an update, I'll post it here. [Update: Chauncey is in fact playing.]

That's all for now -- leave your game thoughts and reactions to seeing Webber in Pistons red, white and blue in the comments.