Share All sharing options for: Jazz pick and roll Detroit to death

[Ed. note -- kudos to DBB reader Tim for providing the recap -- I put down some of my thoughts at the bottom, and I'll post a Chris Webber-specific post soon.]

The game tonight started in familiar Piston fashion… in the hole early. The boys in blue couldn’t buy one coming out of the gate, but they didn’t have far to catch the Jazz because of some excellent early D.

Down 5-0, Chauncey & Rip start the show. I start to feel all warm and fuzzy inside as shots start dropping from all over the floor. Rip & Chauncey pour in 17 points and everyone smiling and slapping fives. Chauncey sits down for a well-deserved breather. 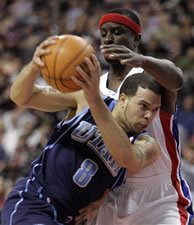 Flip enters the game with 4:18 to go in the first. The Jazz demolish the lead and the Pistons start the second with a 26-24 lead. Flip Murray everyone. Flip's man, Williams, had 10 pts in four minutes with Flip guarding him.

Hunter starts the 2nd and quickly makes an impact turning up the defense and finishing at the rim. The old man!

Chris Webber walks to the scorer's table and the crowd comes to their feet. The building is full of energy. Chris comes in and makes a few nifty passes. I think this guy is going to fit in just fine. He’d have a few more assists if his teammates could make a few more lay-ups. Despite the misses the Pistons extend the lead 45-33 with under 4:00 to go in the half. Timeout Detroit.

During the timeout Sloan tells Kirilenko to go to work in the post. Flip Saunders makes no defensive adjustments (surprise surprise), and the Jazz close the gap. At the half 46-51 Detroit.

The Jazz return from the timeout with a fresh coat of zone, and the Pistons are baffled. New offensive strategy … jack up outside jumpers. This later morphs into the confused, no movement, turnover attack. 12-0 run by the Jazz. Timeout Stones.

More outside shots for Stones, and more Pick & Roll for Jazz. You have got to admire the Pistons determination. They are committed to that stagnant offense. Keep jacking them up boys! 22- 5 run by the Jazz. 72-70 Jazz going into the 4th.

Pistons start 4th by attacking the rim against the man defense. The whistle is not going their way right now. 74-73 Jazz. Jerry calls for the zone after a loose ball foul at 9:55. Pistons confused again, start jacking up outside shots. The Jazz also start to run the magical Pick and Roll. Our defense is broke. 82-75 Jazz – 6:52 left. Timeout Detroit.

Pistons get 2 and 1 at the rim out of the timeout. Defense tightens and Tay attacks basket. Looks like they figured this zone thing out.

Williams attacks the rim and the foul parade begins. Sheed gets a Tech. Pistons attack the rim again. 4:22 to go and the Pistons are down 4. Kirilenko over the back… no call. What? Rip called for a phantom foul and he has five. A few seconds later another bad call and he’s gone.

2:30 left Flip calls time and goes small. He pulls Rasheed. Sheed has 5 and isn’t contesting shots and is getting burned.

The Pistons surge for a second and then the Jazz calm down and attack the big-less middle. The Pistons go full court pressure and close to within one. 97-96.

Hunter gambles on the defensive scramble and Williams burns him for 3. Lindsey repents from downtown, and then gets the offensive board. The Pistons have five seconds to go full court and win it. Chauncey off a screen… no good. Utah wins 100-99.

The Pistons lost this one because of the initial laziness when they encountered the zone leading to easy baskets, and the inability to defend the Pick and Roll.

It's Matt again -- awesome work, Tim, you made my job easier (again). Here are a couple of random, big picture thoughts on the game:

Jason Maxiell got his second consecutive DNP, and Nazr Mohammed picked up his first. Why? It wasn't really because of Chris Webber -- he played just 17 minutes. Rather, it was because Antonio McDyess played 34. The way he was playing, he deserved it -- he finished with 16 points on 6-9 shooting with a team-high nine boards. For those keeping track at home, that's 32 points on 14-19 shooting the past two games. Yeah, I think that slow start is over and done with.

After getting crushed on defense in his brief second-quarter appearance (Utah went on a 17-7 run in the time he was on the court), Flip Murray didn't play the rest of the game. It was bad, but it also made me realize just how nice it is to have Chauncey Billups and Lindsey Hunter back. Hunter made a couple of mistakes but finished 4-5 from the field for 12 points, not to mention showing more hustle than a 36-year-old coming off an Achilles injury really ought to have. Billups finished with 26 points, seven assists and just one turnover. He shot 8-17 from the field and 4-7 from beyond the arc, setting the pace early in the game.

Rip Hamilton struggled greatly, shooting just 5-15 with 10 points, ending his streak of 20+ point games at 11. Maybe I wasn't watching him too closely (I admit, I generally followed Webber and Billups on the court in this one), but I didn't even realize how much he was struggling until looking at the box score after the game. He wasn't taking bad shots, they just weren't falling. Case in point: on Webber's first touch, he made a nice little pass to a cutting Rip, but Rip put it up a little too hard and couldn't get the layup to drop.

Also, and this is a rarity, Rip didn't get to the free throw line once. He took a fair number of shots in the paint, but that's just the way it worked out. He was, on the other hand, plagued with foul trouble himself -- he picked up a couple of shaky calls and ended up fouling out with 3:46 left. It wasn't the reason Detroit lost, though, as Hunter replaced him and was the key to helping Detroit make it so close.

For the Jazz, Deron Williams came up big (31 points, 10 assists). He's a legit up-and-coming star, but the Pistons made things a bit too early for him the way they let him waltz into the paint for layup after layup. And was it me, or did Memo Okur repeatedly come up big late in the game? That guy has been a thorn in our side the last two times we've faced the Jazz.

All in all, it wasn't a win but at least it was entertaining. The pick and roll defense was maddening, but Jerry Sloan's teams have always ran that play to perfection. Considering Billups and Webber had been sidelined for a combined 40 days, I thought they each played as well as could be expected, if not better. With a chance to practice tomorrow, I think the Pistons should be in pretty good shape heading into Friday's game in Minnesota, who narrowly defeated a Billups- and Webber-less Pistons team on Monday.