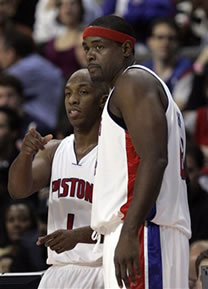 For a guy who hadn't played a game in three weeks and had just one shootaround with his new team, Chris Webber did a respectable job on Wednesday. He opened the game on the bench, getting some last-minute pointers from assistant coach Ron Harper before making his debut two minutes into the second quarter.

Two things were obvious in his short time on the court: 1) he was far more concerned about making a good impression with his teammates than the Palace crowd, and 2) he really didn't know what he was supposed to be doing.

Instead of looking for his shot he focused on finding his teammates. On his first touch, he found Rip cutting toward the basket for what should have been an assist for an easy layup. Rip went a little too hard with it, though, and it rimmed out. On his second touch, he picked up the assist when he drove toward the lane before kicking it back out to a wide-open Chauncey Billups for three.

Later, he found Lindsey Hunter cutting toward the basket, but missed out on an assist when Hunter was fouled. Webber also had a slick behind-the-back pass in the paint to Tayshaun Prince, but Prince was clearly not expecting it and let it get away. That should change in time as everyone gets accustomed to keeping their hands up when C-Webb has the ball.

As for my second observation, Webber spent nearly every stoppage in play talking to his teammates or coaches about where he should be. During an in-bounds play soon after he entered the game, Carlos Delfino actually had to reach out and pull him by the arm to his spot on the floor, holding him there until the ball was released. That's completely to be expected, though, considering Webber has yet to go through his first real practice with the team.

From Krista Jahnke in the Detroit Free Press:

Saunders kept the offense simple with Webber on the floor, and Webber concentrated on not doing too much, on staying unselfish and trying to blend in.

But for flashes, it was clear that something special was brewing. When Webber entered the game, the Pistons had a three-point lead. Seven minutes later, they were up 12.

"I think he gave everyone a glimpse of what's to come," Billups said. "It is his first game in a long, long time. He is really out there trying to not mess up the flow and just sit back and let it happen. That really speaks to his character, to be the kind of player that he is and he wants to come in and just say, 'You go ahead, I'll follow.'."

In one stretch, he did lead. Webber hit a 17-footer, then blocked Matt Harping's layup, kept the ball, fed it quickly to Billups who got it to Rasheed Wallace for a three-pointer.

"I just wanted to be as non-noticeable as possible," Webber said, "as I told a couple of guys on the team ."

Webber finished the game with five boards, three assists and two points on 1-5 shooting in 17 minutes. I'm guessing he'll be starting by Friday, when the Pistons take on the Timberwolves, but in any case he should be much more aggressive in terms of looking for his own shot.

In terms of defense, well, that should theoretically improve in time, as well, once he learns Flip's system (or once Flip creates a system, I'm not sure which one it is... ). His block was nice but he didn't do a great deal to stop Carlos Boozer or the constant stream of layups by Deron Williams. The important thing to remember, though, is Ben Wallace is no longer the measuring stick; Nazr Mohammed is. And considering Webber didn't pick up four fouls in under 20 minutes, he's already something of an improvement. Whether he can help slow down Kevin Garnett on Friday will be a big, big test.

One more point that doesn't really fit anywhere else: I don't know if it was his 21-day layoff or what, but he rarely got going faster than a jog up and down the court. It wasn't really a liability in this game since it more or less matched the pace Detroit usually plays at, but it made me wonder just how fast he could run if he really had to open up. This isn't the C-Webb of old, folks. This is an old C-Webb. Even so, I'm still convinced he brings more to the table than some of his critics have suggested.