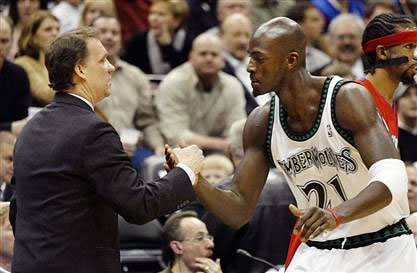 A quirk in the schedule allows the Pistons a chance to avenge Monday's overtime loss to the Timberwolves tonight. The T'Wolves will have home-court advantage this time, but the Pistons will be with Chauncey Billups and Chris Webber, who both watched Monday's game in street clothes. Here's to stopping that three-point juggernaut Mark Blount.

The new starting 5 has arrived: Chris Webber is expected to start, per A.S.B.

Flip's homecoming: Flip Saunders grew up in Ohio, but he played for the University of Minnesota Golden Gophers and spent a decade coaching the Timberwolves. Simply put, he's got a following in the frigid state, which makes the T'Wolves the only team in the NBA that would put up a headline like "Flip Brings Pistons to Town" on their official site.

If you're in Minny for the weekend and don't have plans Saturday... then check out "Ballin' -- 30 Songs About 30 NBA Teams" at the Minneapolis music club First Avenue. It's a benefit concert for Peace Players International which was organized by Sonia, aka Lil Dice, of I heart KG fame. (More info on the concert and Peace Players International on True Hoop). Huge props to Sonia, a blogger with a conscience, for organizing this. I hope someone plans on recording this.

Ball tips at 8pm on WDIV (Channel 4) and ESPN. As usual, leave any game thoughts in the comments.