I was contacted by Nike's advertising/marketing firm asking if I wanted to show their newest commercial featuring the 25th anniversary edition of the Air Force 1. I'm usually not one for gratuitous product placement (especially when it's unpaid), but I liked the spot -- it features nine of today's biggest stars, plus Tony Parker.

Look for Steve Nash, Kobe Bryant, Shawn Marion, Amare Stoudemire, Jermaine O'Neal, Chris Paul, Paul Pierce, LeBron James and ... oh, I know I'm forgetting someone ... Rasheed Wallace. The music is by Justin Blaze and Juelz Santana, "two of the hottest talents in hip-hop," though I'll have to take Nike's word on that. 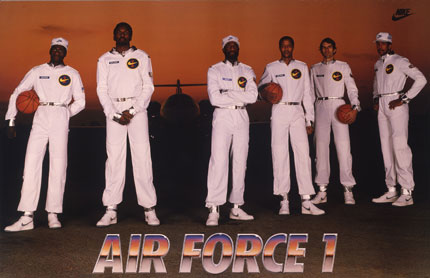 Just to tie this all together, Rasheed Wallace attended MTV's recent Air Force 1 anniversary party, and Need4Sheed has the video of him being interviewed.

Update: Here's the behind-the-scenes making of the commercial.